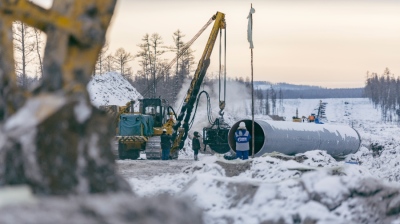 Russia's natural gas giant Gazprom reported a two-fold net profit increase in 2018 to RUB1.46 trillion ($22.6bn) but they could be a lot higher, believes the government
By bne IntelliNews May 8, 2019

There has been yet another shake up at Russia’s state-owned gas behemoth Gazprom, as the company attempts to improve efficiency and cut down on wasteful spending.

Gazprom vice-chairman Oleg Aksiutin announced plans to reform the company's department of corporate expenditures, responsible for controlling over RUB1 trillion ($15.4bn) in spending on tenders and procurements for Gazprom and several subsidiaries, in a letter dated April 30.

“The message is clear — [Gazprom CEO Aleksei] Miller has failed to effectively run Gazprom and enhance its competitiveness on LNG markets for years. With Novatek rapidly expanding its production base, there was likely both internal and external pressure to sack the previous head, Mikhail Sirotkin, and at least make a gesture towards improving the efficiency of spending,” BMB reports. “This is also likely linked to the May decrees and repeated attempts to shame SOEs [state-owned enterprises] and agencies into better spending. [Alexei] Kudrin and the Audit Chamber are undoubtedly watching this closely, and will make use of [State Duma chairman Vyacheslav] Volodin and the Duma to express their dissatisfaction if Gazprom can't get future project costs under control.”

Fed up with the wastage and on a campaign to improve the efficiency of state spending, the Russian government proposed in January to force all the SOEs to submit investment programmes for approval, and to tighten the reigns of control over its companies. The decision was made at a meeting with Prime Minister Dmitry Medvedev on January 24.

Aksiutin stated the reform was intended to eliminate redundancies within the company, reduce wasteful spending and losses, and improve the delineation and delegation of responsibilities within the company. Aksiutin was named to his post to manage the firm's investment programme on April 1 of this year. The proposal calls for the consolidation of spending offices into a unified 200-person team.

There have been a number of changes in management this year and the government is threatening to take direct control of the investment programmes at Gazprom and other SOEs in its quest to improve Russia Inc’s profitability.

The changes come on top of a report by the Federal Antimonopoly Services (FAS) which said that Russia’s economy is starting to look like a “feudal” system as the state share in GDP has increased to 60-70%.

The deputy chairmen of Gazprom’s management committee, Alexander Medvedev and Valery Golubev, who were overseeing the export and domestic gas markets, respectively, were quietly fired in February with no explanation.

In addition, Vsevolod Cherepanov is leaving his post as head of department 307 (responsible for the production of gas, gas condensate and oil), but is to continue working in a different position in Gazprom, VTB Capital (VTBC) said in a note at the time.

Miller has reportedly accepted the changes, but will not announce anything until the end of the May holidays.

Aksiutin replaced Mikhail Sirotkin, who had run the department for years and is widely seen as an associate of Miller's, BMB reports.

The company is still making money, but that is more a function of the prices for energy than management’s business nous, and productivity and profitability are below what they could be. In addition, Gazprom has been investing into a string of mega-infrastructure projects that typically run to RUB1 trillion a year in recent years and that will continue for the next few years as well as the company starts to invest into LNG projects.

Gazprom reported a two-fold net profit increase in 2018 to RUB1.46 trillion ($22.6bn) under IFRS, the company said on April 29. Revenues of Gazprom increased by 26% year-on-year to RUB8.22 trillion, due to higher sales of gas, refining products, and crude oil. Most recently Gazprom recommended a record-high dividend in absolute value terms. Nevertheless, at 17% of total IFRS profit, it remained way below the 50% of IFRS net profit demanded by the Ministry of Finance.