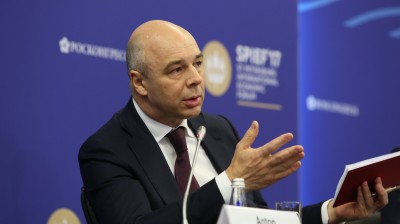 Russia's finance minister says that it may have to spend half of the RUB12 trillion in the NWF sovereign wealth fund this year alone to fight COVID-19 / wiki
By bne IntelliNews April 20, 2020

Given the current oil price of $28 per Barrel of Brent, the funds in NWF would be sufficient to cover the state spending deficits until 2024, Siluanov estimated.

In March the ministry estimated that the liquid part of the NWF will be sufficient to cover budget deficits for 6 to 10 years at oil price of $25-30 per barrel.

The liquid part of the NWF amounts to RUB11 trillion, out of which the government already used RUB2 trillion this year to buy the controlling stake in Sberbank from the Central Bank of Russia (which through CBR's dividends will find their way into the state budget). Less another RUB2 trillion makes the RUB7 trillion estimated by Siluanov.

Siluanov previously estimated that state support package amid coronavirus (COVID-19) epidemic accounts for RUB3.1 trillion (2.8% of GDP), and that RUB2 trillion will be used to cover the budget deficits from the NWF.

As reported by bne IntelliNews, policymakers and analysts have urged the government to increase the COVID-19 response package at least two-fold, bringing it closer to 5% of GDP or more.

But Siluanov argued that as the government is not revising the spending downwards this year despite the drop in oil prices, the total amount of state support for the economy in 2020 could be estimated at 6.5% of GDP.

Recent reports estimated Russia's total state reserves and liquidity buffers at about RUB17.7tn ($238bn), or over 16% of GDP, while the country's debt position is favourable and reserves are not short on foreign currency.