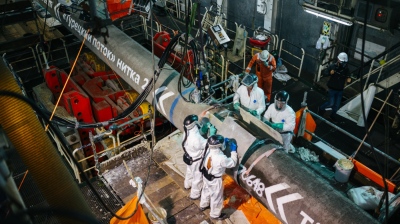 Russia's proposal to make Turkey the hub for its gas deliveries to the EU would involve sending said gas through the TurkStream under the Black Sea. / bne IntelliNews
By bne IntelliNews October 15, 2022

Russian President Vladimir Putin has proposed establishing Turkey as a hub for delivering gas supplies to the EU, in response to the multiple leaks that have rendered the Nord Stream 1 and 2 pipelines inoperable. The proposal has been warmly received by the government in Ankara, but implementing such a project may prove difficult. Turkey could face a potential backlash from the West, while Russia would likely have to cover most of the funding. The project also assumes that some parts of Europe will continue buying Russian gas, despite the EU’s ambition to phase out imports, and increasing access to LNG and other alternative sources of supply.

Putin discussed the proposal with his Turkish counterpart Recep Tayyip Erdogan on the sidelines of a regional leaders summit in Kazakhstan’s capital Astana.

“If Turkey and our possible buyers in other countries are interested, we could consider building another gas pipeline system and creating a gas hub in Turkey for sales to third countries, especially, of course, the European ones, if they are interested in this, of course,” Putin said.

Erdogan noted that both Turkey and Russia had instructed their respective energy authorities to immediately start technical studies on the plan. According to Gazprom CEO Alexei Miller, the project could involve constructing new pipelines in parallel to the existing TurkStream pipeline

“Together with Mr. Putin, we have instructed our ministry of energy and natural resources, and the relevant institution on the Russian side, to work together,” Erdogan said. “They will conduct this study. Wherever the most appropriate place is, we will hopefully establish this distribution centre here.”

Russia has four routes for sending gas to Europe. First is the Ukrainian gas system, where the gas continues to flow despite the war. It had the capacity to flow upwards of 100bn cubic metres of gas prior to the war, but since then Ukraine has shut down one of its two border points, claiming the theft of supplies by Russian proxies. Ukraine and Russia are also in a renewed dispute over gas transit payments, raising the risk that deliveries could be shut down altogether.

Meanwhile, the 33 bcm per year Yamal-Europe pipeline that runs through Belarus and Poland to Germany has been rendered inoperable since the war started as a result of sanctions and counter-sanctions that Russia and Poland have imposed on each other.

Then there are the Nord Stream 1 and 2 pipelines, with capacities of 55 bcm per year each. Gazprom has acknowledged that a large part of Nord Stream will likely need to be replaced as a result of the leaks. Company CEO Alexei Miller estimated on October 12 that it would take more than a year for the repairs to be completed. One of the two Nord Stream 2 strings is undamaged, and Russia has suggested it could be used to deliver gas if the necessary certification process is completed in Germany. Germany could agree to do this, depending on the stress that its energy system suffers this winter. Several prominent German politicians have called on Berlin to do this, but so far German Chancellor Olaf Scholz’s government has not raised this option.

This leaves only the 31.5 bcm per year TurkStream, which runs under the Black Sea and makes landfall in west Turkey. But one of its two strings is used to supply the Turkish market, leaving only 15.75 bcm per year of capacity available for Europe.

Turkey already serves as a key hub of gas flow into Europe. In addition to TurkStream, it also hosts part of the Southern Gas Corridor (SGC) that funnels gas to Southeast Europe from Azerbaijan. It also has several LNG import terminals.

Turkey would have little need for extra Russian gas itself. The country is awaiting the launch of the offshore Sakarya gas field in the Black Sea in early 2023, which will produce 3.7 bcm per year of gas under its first phase of development, and around 15 bcm per year by 2026. It is more likely, then, that Turkey may end up negotiating with Russia to deliver some of the gas it currently buys from Gazprom to Europe instead.

How much extra gas Europe will be interested in receiving from Russia will depend on EU resolve. Some countries heavily dependent on Russian gas and with closer political ties with Moscow will likely push for a later deadline for ending Russian gas imports, and will push for continuing those imports indefinitely. Other non-EU countries such as Serbia will continue receiving supplies from Russia, and expanded transit capacity via Turkey would enable Moscow to cut deliveries through Ukraine. There may also be new markets for Russian gas such as Albania, which currently consumes hardly any gas but is eager to expand its role in order to reduce its reliance on hydropower plants (HPPs).