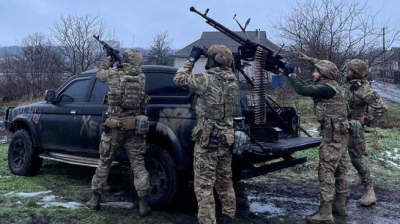 Russia launched a big missile strike on Ukraine on New Year’s Eve. The capital's missile defence system has become very effective but some missiles got through. / bne IntelliNews
By bne IntelliNews December 31, 2022

The sky over the Russian city of Astrakhan on the Black Sea was full of vapour trails of dozens of missiles on their way to strike Ukrainian cities on New Year’s Eve.

“Kyiv, stay the f****ck in shelters!!!” Roman Motychak the founder of Ukrfinformum tweeted to warn other locals shortly after the attack started.

Reports from across the country came in via social media in what appears to be the biggest barrage of Russian missiles set since the bombardment began on October 10.

The latest attack come only a day after Russia sent some 120 missiles against Ukraine on December 30 – its biggest strike today – as the Kremlin appears determined to plunge the entire country into darkness on what is the biggest holiday of the year in Eastern Europe. The whole country was under air raid alert as of midday local time.

Kyiv mayor Vitaly Klitschko reported on social media there were explosions in the Solomianska, Pechersk and Holosiivsk districts in the capital. “There is destruction. Rescuers and medics are on their way,” Klitschko wrote.

“Air defences have been working pretty non-stop for the past five minutes in Kyiv. I don’t *think* there have been any impacts so far, but it’s only the first wave of missiles. And other cities not so lucky,” Oliver Carroll, the Economist correspondent in Kyiv said in a tweet.

Ukraine’s air missile alert system warned locals to get to bunkers while the onslaught was ongoing. There were reports on social media that multiple cities have been hit.

“No power in my part of Kyiv, then the air raid alert goes off, and now they say missiles are incoming. Air defences said to be working in Kherson, Zhytomyr, Kyiv and Vinnytsia oblasts,” Euan MacDonald, a Kyiv-based journalists, said in a tweet.

A video released by the NEXTA telegram channel, reportedly from the Russian city of Astrakhan on the shores of the Black Sea, showed about a dozen vapour trails of missiles flying over the city in the direction of Ukraine. Russia has been firing missiles on Ukraine all week from multiple locations, including from airbases on its western border, those on the Black Sea coast and from the ships of the Black Sea fleet.