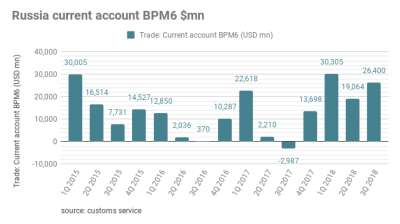 Russia's current account is expected to end this year with a record $113bn surplus / bne IntelliNews
By Ben Aris in Berlin October 13, 2018

What a difference a year makes. Russia was facing the prospect of a double deficit last year when the balance of trade surplus very briefly went into the red, but this year thanks to rising oil prices it is on course to turn in a record current account surplus north of $100bn.

Last year the Russian government was still in the process of cutting costs and oil prices were depressed. Used to earning a healthy surplus from raw materials exports, the low oil prices have been particularly painful and forced through some real restructuring. Since 2008 the federal budget’s breakeven price of oil has fallen from $115 and is now $53, according to Renaissance Capital, whereas oil is trading at $84 at the time of writing. The fall in the breakeven price has contributed as much to the improvements in the current account position as the rise of oil prices has. Taken together, Russia Inc is now more profitable than it was in 2008 with oil over $100.

Alexander Isakov, chief economist at VTB Capital, said in a note: “The CBR’s balance of payments report for 3Q18 is remarkable in two ways. First, financial flows showed the largest single quarterly decline in the external liabilities of the non-financial sector since 4Q14. However, the structure of the decline is different this time, as most of it is a reduction in debt related to FDIs vs. loans in 2014. Second, the report sets the FY18 current account surplus on course to break 2008’s record of $104bn.”

VTB has updated its estimate of the current account surplus for 2018, which now stands at a new record high of $113bn and exceeding the CBR’s projection of $98bn-99bn published in its recent monetary policy report by around $15bn.

With tithes of cash washing into the economy, companies are taking the opportunity to pay down debt.

But the composition of the deleveraging this time round is different, says Isakov: “The current report shows that the bulk of the decline was in the direct investment category ($6bn), with lesser deleveraging in loans ($3.2bn), while back in 4Q14 the mass of the capital outflow was in loans ($9.3bn) with portfolio investment a remote second ($1.5bn).”

“From a purely methodological perspective, the FDI flow is normally related to entities linked by a holding of at least 10% of ordinary share or equivalent. While the precise nature of the flow cannot be identified from the data supplied by the CBR, we believe that FDI flows tend to be non-recurring, i.e. unlikely spill over into 4Q18,” adds Isakov.

Of course most of the extra money is coming from the rise in the oil prices, but not only that. Slowly Russia’s trade equation is diversifying and exports of other goods are starting to play an important role.

The current account surplus is further improved by the slow pace in the growth of imports, as foreign goods and services remain expensive after the devaluation of the ruble. This year the ruble has weakened by 17% YTD.

Imports of goods were flat in 3Q18 at -1.3% y/y and remained almost unchanged vs. 2Q18 at $63bn, marking the end of the post-2015 volume recovery. VTB believes that import volumes will stabilise at close to $60bn per quarter.

Finally, despite the inflow of money, the accumulation of international reserves has been halted after the CBR decided to stop buying foreign exchange on the open market – part of the Russian government’s battening down the hatches policy this year ahead of possible “crushing” sanctions on Russia in the autumn.

“Considering that open market purchases were put on pause in early August, it comes as no surprise that the international reserve growth rate halved and stood at $5bn vs. $11.3bn in 2Q18,” says Isakov.