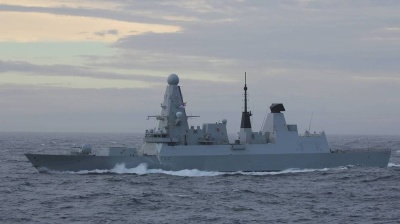 Russia fires warnings shots across the bows of UK warship off the Crimea shores
By bne IntelliNews June 23, 2021

In the first exchange of fire since the end of the Cold War, a Russian ship fired warning shots across the bows of a UK Royal Navy ship off the coast of Crimea on June 23.

"At 11:52 on June 23 this year, the UK Navy’s guided missile destroyer Defender operating in the north-western part of the Black Sea crossed the state border of the Russian Federation and moved 3 km into the territorial sea near Cape Fiolent," the ministry said in a statement.

The UK Ministry of Defence says that no warning shots from Russia were made towards the Royal Navy destroyer HMS Defender off the coast of the occupied Crimea.

"No warning shots have been fired at HMS Defender. The Royal Navy ship is conducting innocent passage through Ukrainian territorial waters in accordance with international law," the UK Defence Ministry said in a statement on Twitter.

The incident comes only a month and half after Moscow massively built up its troops on the Ukrainian border, leading to speculation that Russia was preparing to invade that country.

Western powers have been nervous about Russia’s military build-up and reinforcements have remained in the Crimea even after the bulk of Russia’s troops were withdrawn from the Ukrainian border at the start of May.

As recently featured in bne IntelliNews, Russian forces are back in the Mediterranean after being mostly absent for much of the last two decades, and they are there to stay.

The US had intended to send warships into the Black Sea in April during the Russian military movements near Ukraine but ultimate demurred. The British, however, went ahead with plans to send two frigates to the region in a show of solidarity with Ukraine, escalating tensions by doing so.

The UK destroyer received a warning that weapons would be employed, if it violated the Russian state border, but did not respond to it, the ministry said.

"At 12:06 and 12:08, the border guard patrol ship conducted warning fire. At 12:19, a Su-24M plane carried out preventing bombing (four OFAB-250 bombs) along the route of the guided missile destroyer Defender," the statement says, Tass reports.

The showdown comes as Russia and the US seek to restart arms control talks and de-escalate the mounting military tensions between them. Arms controls were high on the agenda at the recent Geneva summit on June 16 between US President Joe Biden and Russian President Vladimir Putin.

The current situation in the world is characterised by great unpredictability, collapse of arms control agreements and the expansion of illegitimate unilateral sanctions, Russian Security Council Secretary Nikolai Patrushev said at a meeting with his counterparts from the Shanghai Cooperation Organization's member-states in Dushanbe on June 23.

While Russia was roundly criticised for its troop movements near Ukraine, the Russians claim that Nato has also been bringing up more forces near to its border.

Military units from Nato's extra-regional countries are stationed in Eastern Europe on a permanent basis, the chief of Russia's General Staff, General of the Army Valery Gerasimov, complained to the Moscow International Security Conference on June 23.

"Up to 10,000 troops from the alliance's extra-regional countries are stationed in Eastern Europe on the permanent basis," Gerasimov said.

He warned that the strength of Nato's forward forces, including the contingent of US troops near Russia's western borders, would keep growing.

"This is well seen in the 2020 agreement between Washington and Warsaw, envisaging additional deployment of command centres, logistic units, special operations forces and army aviation in Polish territory," he said.