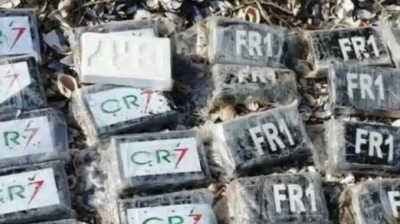 Authorities found 152kg of cocaine floating in the sea on Romania's Black Sea coast and are searching for more
By bne IntelliNews April 9, 2019

A total of 152 kilograms of cocaine were found this weekend in various locations on the Romanian Black Sea coast, the Directorate for Combatting Organised Crime and Terrorism (DIICOT) announced on April 8. Police are still searching the seashore for more drug caches.

More than 300 police officers backed by two helicopters on Sunday, April 7 mounted a massive search along Romania's Black Sea coast after 131kg of cocaine washed ashore, police said. More has been found since then and the search continues.

Police spokesperson Georgian Dragan told AFP that 14 boats and several frogmen were also involved in the unprecedented search operation for more packets of the drug, which began arriving ashore on Friday.

The cocaine, packaged in plastic bags, reportedly came from a journey across the Black Sea that ended badly for the traffickers, for reasons that have not been established by Romanian investigators so far.

On March 26, DIICOT officials announced that two Serbian citizens involved in the case were arrested for committing a high-risk drug trafficking offence. Both were caught in cars registered in Serbia. One had been trapped in traffic in Prahova County and the other at the border crossing point with Serbia from Iron Gates 2. Packages of drugs were found in Agigea, Eforie, Olimp, 23 August, Costinesti and in the port city of Constanta, in the Pescarie area, News.ro reported.

The recent find comes after the prosecutors discovered 1,040 kg of cocaine in and around a boat on the Black Sea shore, close to Sfântu Gheorghe, two weeks ago. Last week, the border police found another 200 kg of cocaine floating in the Black Sea waters, in the area of the marine platforms in Constanta. The authorities have asked anyone who finds packages of drugs to not open them, and to deliver them to the nearest policeman or call 112. The packages may contain drugs of very high concentration (over 90%), which can be life threatening, the Constanta County Police Inspectorate said.