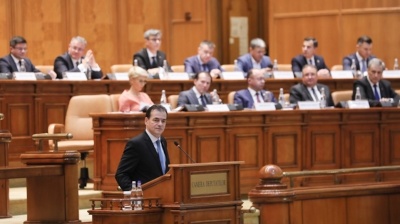 The Romanian parliament endorsed the cabinet headed by Ludovic Orban on November 4, as 12 MPs from the Social Democratic Party (PSD) and Pro Romania decided on the day of the vote to back him.

That gave Orban 240 votes in parliament, seven above the threshold for a majority. Until the last minute it had been unclear whether the National Liberal Party (PNL) leader would be able to gain the support of enough MPs to install his government in office after the previous cabinet headed by PSD leader Viorica Dancila was ousted in a no-confidence vote last month.

Orban spoke of the “miracle” of seven parties joining forces to support his cabinet, despite his PNL holding only 20% of the parliament’s seats. But the heterogeneous coalition of MPs who supported Orban also points to the problems he will face in gathering the necessary support for each and every step he wants to take, particularly if it involves a vote in parliament.

Raiffeisen analysts wrote in a November 5 note that the vote ended weeks of uncertainty. “Still, the minority PNL government has a fragile position and its ability to limit ongoing fiscal slippage will be strongly hindered by upcoming local elections (in May-June 2020) and parliamentary elections (in November 2020). Moreover, the new prime minister said recently that his cabinet will only focus to limit the spike of the deficit above the 3% of GDP threshold in 2019,” Raiffeisen analysts warned.

During the swearing-in ceremony, President Klaus Iohannis outlined as priorities planning the budget for next year and the revision that is needed for this year. Resuming procedures related to the justice laws and streamlining the fight against corruption are the other key issues at the top of the prime minister’s agenda, Iohannis added.

“Sincerely, I am concerned about the legacy the former government left in each ministry,” Iohannis said. Iohannis has repeatedly clashed with Dancila and the two previous PSD-led governments since the December 2016 general election, and — assuming he is re-elected in the presidential vote later this month — is set to have a much better relationship with the new PNL-led government.

Orban assured Iohannis that he is going to be “a reliable partner”.

“Romania has a new government in spite of the shameful boycott of two parties,” Orban said after the vote.

Former prime minister Victor Ponta, the head of Pro Romania party, talked of the “shameful betrayal” of seven of his party’s MPs who voted for Orban. They supported a cabinet that “will do much harm to the country,” Ponta said. He expelled the seven from his party on the spot, including founding member Daniel Constantin. Ponta might have to expel MEP Mihai Tudose, one of his main collaborators in the Pro Romania project, because the latter reportedly negotiated with the PNL.

Five PSD MPs voted for Orban as well, with only announcing her plans in advance. PSD leader Dancila said that the five have already been expelled.

Famous ex-defence reporter arrested, accused of treason
7 hours ago
Turkmen President Gurbanguly Berdimuhamedov takes a holiday as WHO mission finally arrives in Ashgabat
8 hours ago
Violent clashes with police at thousands-strong anti-lockdown protest in Belgrade
15 hours ago
Belarus presidential election to have no outside observers, opposition may united by a single candidate
23 hours ago
US intelligence memo admits there is “no evidence” of Russian payment of bounties to Afghans for killing US soldiers
1 day ago