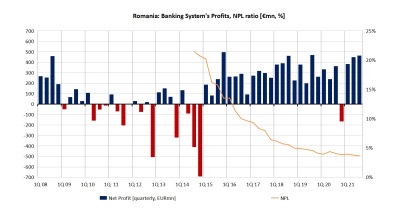 The Romanian banking system posted RON6.4bn (€1.3bn) aggregated net profit in January-September, 37% more than in the same period of 2020 and 24% more compared to the same period of 2019, according to compilations based on data released by the National Bank of Romania (BNR). Banks’ non-performing loan (NPL) ratios were also decreasing.

The ongoing rise in interest rates bodes well for the banks’ profits, but not necessarily for the quality of their portfolio loans (or for their debtors’ balances).

“The banking system came out of this crisis in better shape than it entered,” concluded Bogdan Neacsu, the new president of the Romanian Association of Banks (ARB) and CEO of CEC Bank, quoted by Ziarul Financiar daily.

Indeed, the banking system’s non-performing loan ratio dropped to 3.7% at the end of September from 4.1% one year earlier and 4.4% at the mid of 2020 during the climax of the crisis.

Some sectors of Romania’s economy may have faced problems during the coronacrisis, such as hotels, restaurants and cafes (HoReCa) or more recently the automobile industry, and the economy as a whole has lost steam after recovering from the lockdown quarter — but this has nothing to do with the banking system that is now faring better than ever.

And this comes as no surprise as the biggest share of their loan portfolio is placed in mortgage loans, government papers and only to a smaller extent in risky corporate loans. Romanian companies instead rely more on self-financing and commercial credit.