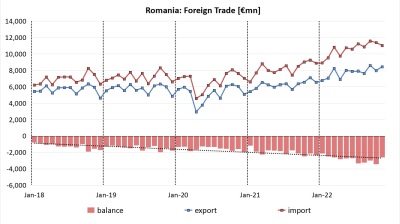 Romania’s foreign trade deficit temporarily moderated in November but even so, it rose by 21% y/y to €2.59bn, enough to bring the trade gap in the 12-month period to the end of the month at €33.3bn or 12.1% of the country’s GDP.

The still buoyant private consumption and the recovery in public investments are thus putting more pressure on the country’s chronic external deficit. The central bank has constantly argued against currency depreciation as a means to facilitate balance of payments (BoP) correction, but it also said its interventions are only aimed at smoothing volatility. Recently, however, vice-governor Leonardo Badea felt the need to stress the “record high official reserves” that guarantee macroeconomic stability.

The country’s external deficit moderated in relative terms in November, but this is not likely to reflect a sustainable trend.

Exports increased by 19% y/y to above €8.4bn, remaining close to the record marked in September, while imports advanced by a marginally higher rate, remaining above €11.0bn.

The moderation in the commodity prices is still likely to further tone down imports, where chemical goods hold a significant share. On the upside, the automobile industry is helping exports and new models launched by Dacia and Ford will sustain the trend.