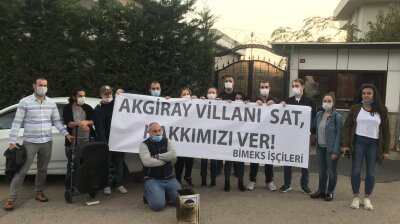 Workers at Bimeks (@bimeksdirenisi) advise owner Vedat Akgiray to sell his villa to pay the company debt.
By Akin Nazli in Belgrade April 29, 2021

Bimeks, launched in 1989 as a humble shop by the brothers Murat Akgiray and Vedat Akgiray, is a “truly Turkish” story of the rise and fall of a company amid Turkey’s erratic and often shifty capital markets.

As the SPK head, Vedat Akgiray launched a campaign for initial public offerings (IPOs). Many companies that were put in the spotlight by that campaign later went bankrupt.

Bimeks itself was listed on the Borsa Istanbul in 2011.

Vedat Akgiray is the only SPK head to have ever been dismissed before fulfilling his five-year term. He lost the post in 2012.

In 2019, Bimeks applied for bankruptcy protection, known as “concordato” in Turkey. Its application came amid a concordato rush in the country following the August 2018 Turkish lira crisis.

Vedat Akgiray nowadays still works at Bogazici University in Istanbul as a professor of finance.