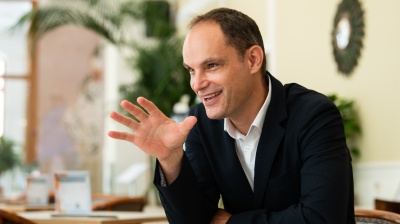 Anze Logar, a 46-year-old economist, leads the presidential race with support from 33.91% of the voters in the first round. / anzelogar.si
By Valentina Dimitrievska in Skopje October 23, 2022

Rightwing politician and former foreign minister Anze Logar and independent lawyer Natasa Pirc Musar will face each other in Slovenia’s presidential election runoff after winning the largest shares of the votes in the first round on October 23, according to the state election commission's partial results.

The result puts Logar, from the opposition, rightwing Slovenian Democratic Party (SDS), in the lead, ahead of Pirc Musar, whose campaign focussed on issues such as human rights and tackling poverty, while the senior ruling Freedom Movement did not put forward a candidate.

Seven candidates were running for president, mostly a ceremonial post, in the first round of the election. Incumbent President Borut Pahor was ineligible to run for a third mandate as president, a post which has largely formal powers.

As none of the candidates received the support of 50% of voters, the second round of voting will be held on November 13.

Milan Brglez was third with 15.46% of the votes. PM Robert Golob’s Freedom Movement decided in August not to put forward a candidate, after its candidate for president Marta Kos withdrew. However the party supported Brglez as the candidate of its coalition partner the Slovenian Democrats (SD).

The results are not final, as the postal votes still have to be counted in the next few days.

After the polls closed, Logar said that he believes in victory and that he is going into the second round with this feeling.

"I worked on the campaign from the bottom up, the response from the citizens was good," he said, broadcaster RTV Slovenia reported.

Logar’s slogan in the election campaign is Sodeleujemo #ZAprihodnost (Working together #FORtheFuture). His electoral programme advocates the creation of a stimulating economic environment, inclusion of young people, green transformation and the issue of security and foreign policy. In order to achieve this Logar believes that cooperation of all political parties is needed.

After the first partial results were published, Pirc Musar said that she was happy that voters recognised the values she stands for, as well as her non-partisanship. In the second round she hopes to attract the support of those who believe in a modern EU and who share the same values as herself.

Pirc Musar highlighted the topics of human rights, fight against the poverty, giving opportunities to young people and respecting the elderly for their work in the past.

The mandate of the new president will begin on December 23.