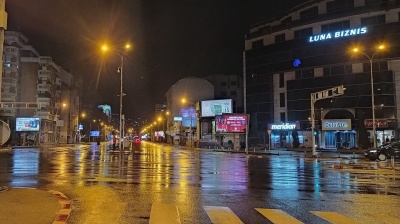 People across North Macedonia are waiting in long queues as they stock up on food and other essentials due to the raising panic over the coronavirus pandemic.

Fears have been growing since the first case was reported in the country on February 27.

Cooking oil, flour, pasta and hygienic products are the most sought after, with shoppers leaving the shelves of shops and supermarkets almost empty.

The push has forced one of the most popular retailers, Kam Market, to appeal to citizens to avoid stockpiling and make purchases in reasonable quantities in order to leave some products for their fellow citizens. Otherwise, the Kam administration said, shortages would force the retailer to close its stores.

"We urge you not to buy enormous quantities and to limit the supply to weekly needs. This way of shopping will only endanger the equitable supply for each of you. Be in solidarity with the customers who will come after you,” the retailer said in a Facebook statement. Kam Market also cut its working hours on weekdays.

The number of coronavirus-infected people in North Macedonia has increased to 18 after six new cases were registered on March 14, five in the western city of Debar and one in Skopje, who had arrived from Spain.

The government immediately announced another set of strict measures, ordering the complete closure of cafes, restaurants, casinos and betting shops on Saturday, just one day after they had introduced shortened working hours. All malls will be also closed except for food stores and pharmacies.

A few days ago, the authorities banned the entry of foreign nationals from high-risk countries, such as China, Germany, Iran, Italy, South Korea and Spain, but as of March 14 they extended the measure to moderate-risk countries, which is a quite long list and includes Austria, Greece, Slovenia, Sweden and the UK.

The streets of Skopje are half-empty, and at night the capital looks like a ghost town. Traffic is much lighter than before when life was normal and streets were crowded with cars.

Ohrid airport will be closed from March 16 for all flights, and as all measures are being tightened it will not be a surprise if the authorities also order the closure of the main airport in Skopje.

Several smaller border crossings are closed, although the major ones, such as Gevgelija at the southern border with Greece and Tabanovce with Serbia in the north, are still operating.

Kindergartens, schools and universities have been closed since March 12.

While retail turnover is on the rise, the dreaded virus has hit a number of economic sectors in the country with an immediate effect on the tourism and transport sectors.

“The situation in the [tourism] sector is alarming. Surveys show that 40% to 80% of the hotels and accommodation facilities are facing travel cancellations. The trips already scheduled have been canceled or tourists plan to cancel them,” Emil Dimitrovski, head of the Chamber of Commerce of Tourism, was cited as saying by plusinfo.com.

According to tourist industry workers, the whole plan for the year is collapsing as 70% of the planned tours from Asia and other countries have been canceled.

Dimitrovski added that that the situation is such that 90% of Macedonian citizens who wanted to travel insist on cancelling or postponing their trips.

“Scheduled tours for May and June are reduced to zero. If the situation does not improve by September we will face huge losses,” Vlatko Sulo from the National Incoming Tourism Association (NAITM) was cited by plusinfo.com.

The tourism association is seeking government assistance to help the sector to survive such as paying contributions to over 20,000 employees in order to avoid staff being fired. They also demand a reduction on VAT on food to 5% for the sector, as well as a recommendation for citizens to travel to tourist resorts in the country.

Sulo said more than 20,000 people work in travel agencies and hotels that are members of the five travel associations and a total of 100,000 workers are associated with the tourism sector.

Tourists and hoteliers expect the Ministry of Economy and the government to accept the measures that they are proposing for the sector, which contributes $425mn to the economy per year.

Interim Prime Minister Oliver Spasovski said that the government already has available funds in the budget and will consider what category of businesses should be assisted.

The transport sector is also seeking government support for the losses it is suffering as a result of the coronavirus pandemic. Losses will be analysed later.

“The sector is facing unfulfilled services, failure to fulfil contracts, reduced passenger numbers, restriction of movement of goods and a forced absence of drivers,” news agency MIA reported citing a statement from the transport sector’s union.

Transport workers require donations of disinfectants for their vehicles, subsidising of payroll contributions for the period during which the virus prevention measures will be applied, and for banks to grant a moratorium on loan payments.

Carriers warn that any disruption or halt of transport will result in consequences in every aspect of citizens’ life, such as people’s health, food distribution and energy.

North Macedonia’s Chamber of Commerce also seeks state aid to rescue domestic companies suffering damages due to the restrictive measures for the prevention of Covid-19.

"The Macedonian economy is facing the biggest challenge so far," the Macedonian Chamber of Commerce’s President Branko Azeski was cited by news agency MIA.