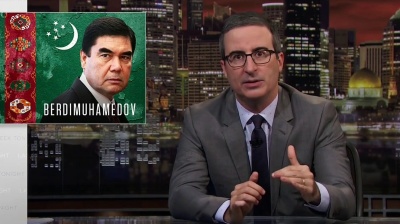 Last Week Tonight with John Oliver put together a scathing takedown of the Turkmen dictator. / Screenshot.
By bne IntelliNews August 12, 2019

So the story that Turkmen officials are covering up the death of President Gurbanguly Berdimuhamedov is as dead as a dodo.

For unless the most startling double has been discovered and hired—or there is an identical twin nobody knows about—that was indeed Berdimuhamedov giving an opening speech at the Caspian Economic Forum (CEF) in Turkmenistan on August 12, making his first public appearance since July 5.

It is unusual for Berdimuhamedov to stay out of the limelight for such a long period and his absence prompted a proliferation of unconfirmed rumours and reports that he had died or slipped into a coma during hospital treatment.

Berdimuhamedov had officially been on vacation for nearly a week when Aslan Rubayev, director of Moscow’s Center for Monitoring Eurasian Problems, told Russian radio station and internet news site Govoritmoskva.ru on July 20 that he had died of acute renal failure. After Rubayev was widely quoted by other Russian media outlets, he withdrew his remarks and said they were unfounded.

Strenuous denials
The government of the gas-exporting Central Asian ‘hermit nation’ responded with strenuous denials but observers said it was quite possible officials wanted to keep the death of the president quiet while arrangements were put in place to ease the way to a chosen successor. Officials released video footage of the autocrat on holiday to try and quash rumours. In various sequences (wacky enough to prompt Last Week Tonight with John Oliver to put together a blistering takedown of Berdimuhamedov and his cult of personality and taunt the lover of Guinness world records with the “world’s largest marble cake” frosted with an image of Berdimuhamedov being thrown from his horse), he was shown driving a rally car around Turkmenistan’s Hell’s Gate flaming gas crater and scoring three strikes in a bowling game, among other activities, but those still insisting he could be dead pointed out that there was no way of conclusively showing when the filming took place.

The Turkmen leader, 62, delivered his speech at the CEF for 20 minutes and appeared in good health, speaking coherently. Short videos from the sidelines of the event showed him meeting with the prime ministers of Russia, Kazakhstan and Azerbaijan, along with the first vice president of Iran. Photos of the CEF conference hall, located in the Avaza tourist zone near the city of Turkmenbashi, showed him sitting next to Russian Prime Minister Dmitry Medvedev.

The speculation surrounding Berdimuhamedov began back on July 6 after he failed to appear in public on that day and the previous day despite EU foreign policy chief Federica Mogherini being on a visit to Ashgabat.

Turkmenistan: A kick in the gas