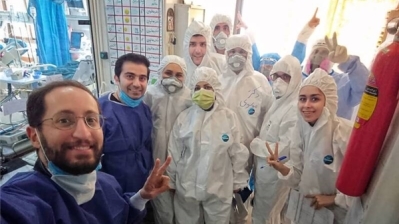 A report from The Associated Press on May 12 painted a harrowing picture of just how hard doctors and nurses in Iran have been hit by the country’s coronavirus (COVID-19) emergency and “disjointed” response, stating that during the first 90 days of the virus outbreak alone, about one medical staffer died each day and dozens became infected.

The article, written by a reporter in Cairo who interviewed more than 30 medical professionals and reviewed communications by doctors on messaging apps and other documents, reads: “It is no secret that Iran has been hit hard by the coronavirus. Official government figures show that around 100,000 people were infected by the virus and around 6,500 have died. But a report by the research arm of Iran’s parliament said the number of cases could be eight to 10 times higher, making it among the hardest hit countries in the world. The report said the number of deaths could be 80% higher than official numbers from the Health Ministry, about 11,700.”

Though the Iranian government is currently reporting a decline in the number of COVID-19 infections and deaths in many areas, local authorities are expanding cemeteries in places like Tehran where the municipal council said it had to add 10,000 new graves to its largest cemetery, Behesht e-Zahra.

The report also relates how “in the beginning, medical staffers faced the outbreak with very limited equipment. Some washed their own gowns and masks or sterilized them in regular ovens. Others wrapped their bodies in plastic bags they bought at the supermarket. The result: Dozens of medical professionals without adequate protection died along with their patients”.

It adds: “Iran’s leaders, several medical professionals said, delayed telling the public about the virus for weeks, even as hospitals were filling up with people suffering from symptoms linked to the virus. And even as doctors and other experts were warning the Iranian president to take radical action, the government resisted, fearing the impact on elections, national anniversaries, and the economy.”

As health services struggled with makeshift equipment, the health ministry said millions of pieces of protective gear had been stolen and diverted to the black market, the report says, adding: “One doctor interviewed by The Associated Press — who, like all medical workers interviewed for this story, spoke only on the condition that they not be named for fear of persecution — said he and his colleagues were even discouraged from using protective equipment. He said government officials claimed wearing masks would cause panic.”

A list compiled by a group of Iranian doctors found that a total of 126 medical staffers have died since the virus was first reported, mostly in the provinces of Gilan and Tehran, while over 2,070 contracted the virus. The Associated Press said it verified 100 of the deaths by piecing together scattered news reports in local media outlets, statements from health institutions and social media messages of condolences.

Health Ministry spokesman Kianoush Jahanpour acknowledged to the news agency the deadly toll of COVID-19 on the medical profession in Iran, telling the news service that the total number of deaths was 107. Jahanpour added that 470 had tested positive for the virus. But he placed the blame on the US saying: “Remember this is a country under sanctions.”

“The number of real patients with COVID-19 in Iran, from the beginning ... until today is much more than what has been reported,” a Tehran radiologist was quoted as saying, in comments that the news agency said echoed similar sentiments expressed by most medical workers it interviewed. He estimated that the numbers were three to four times higher than the figures released by the government.

The article concluded: “As the outbreak in Rasht unfolded during the last week of February, patients packed the clinic of the city’s most popular physician, Mohammad Bakhshalizadeh, who often treated the poor for free, set up the first association for physicians in the province and volunteered during the war with Iraq.

“As the virus spread, the 66-year-old doctor examined an average of 70 patients each day, largely without protective gear.

“A week after Iran officially announced the first two official cases in Qom, Bakhshalizadeh developed a fever and had trouble breathing. Initial tests for coronavirus were inconclusive. Another test showed that his lungs were turning white.

“He later drove himself to several hospitals until he found one with an empty bed.