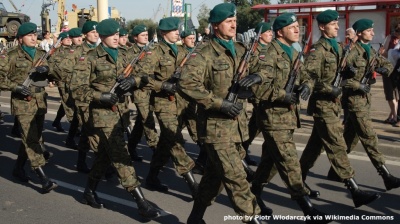 In Poland, the attack led some military experts to call on the West to stand up to Russia more than just by retroactive economic sanctions. / Wikipedia Commons
By Wojciech Kosc in Warsaw March 14, 2022

A Russian missile strike on a Ukrainian military base near Starichy, just 20 kilometres from the border with Poland, brought the war ever closer to Nato’s doorstep on March 13, raising fears of direct engagement of the US-led alliance against Russia.

Russia reportedly fired around 30 cruise missiles, killing 35 people and wounding 134. The target facility was the International Peacekeeping and Security Centre, a training ground for the Ukrainian army, where US forces were stationed until days before the invasion as part of Nato’s training mission, The New York Times reported.

It was not clear if any Nato military instructors were among the victims.

The attack raised fears of an accidental strike on Nato territory. US national security adviser Jake Sullivan said that such a strike would trigger an immediate response.

“If there is a military attack on Nato territory it would cause the invocation of Article 5, and we would bring the full force of the Nato alliance to bear in responding to it,” Sullivan told CBS News.

The attack on the so far relatively quiet western Ukraine is also seen as Russia’s attempt at deterring Ukraine’s western allies from sending military and humanitarian aid, a large part of which is going through Poland.

In Poland, the attack led some military experts to call on the West to stand up to Russia more than just by retroactive economic sanctions.

“I believe that an offensive strategy should be adopted – giving Russian an ultimatum to do what the West expects under the threat of imposing specific sanctions,” Koziej said.