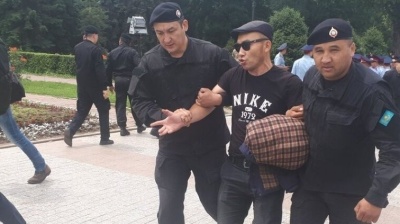 Since the June election protests, hardly a week has gone by without news of another demonstration in Kazakhstan.
By bne IntelliNews September 23, 2019

Is the genie out of the bottle where protests in Kazakhstan are concerned? Ever since demonstrators surprised the authorities and the outside world with the extent and vigour of their street demonstrations during the shoo-in snap election of Kassym-Zhomart Tokayev to replace long-ruling Nursultan Nazarbayev in early June, the former Soviet state has seen protests hit the headlines almost every week.


At the weekend, law enforcement authorities in the country moved to try and nip nationwide demonstrations in the bud, quickly detaining 57 people as they broke up rallies held in several cities, including the capital Nur-Sultan and commercial capital Almaty. Rallies also took place in smaller cities such as Shymkent. The interior ministry on September 23 said around 100 people were detained in all, with nine given several-day jail sentences, six fined and the others released without charge.

Following the election period protests, during which around 4,000 people were officially taken into custody, Tokayev moved to quell tensions by, in early September, announcing that sanctioned anti-government rallies would be tolerated. But the weekend’s demonstrations were organised by the banned Democratic Choice of Kazakhstan (DVK) opposition movement, meaning officials would have looked weak if they had permitted them to take place unhindered.

“Wake Up, Kazakhstan”
Among the small-scale rallies lately ‘licensed’ by the authorities was a pro-democracy movement event in Almaty, featuring, for instance, youth members of the “Wake Up, Kazakhstan” (“Oyan, Qazaqstan” in Kazakh) group formed this year. Their event was not disturbed by any police or security force action.

The protesters at the weekend drew on the recent anger that has broken out in Kazakhstan over what are seen as inequitable Chinese investment projects, while some ire was directed at the continued influence the 79-year-old Nazarbayev is said to still wield in ruling the country from behind the scenes.

Reuters reported that in Nur-Sultan, police detained a man with a banner reading “Let’s not give way to Chinese expansion” and “The old man is the enemy”, an anti-Nazarbayev slogan. Several people chanted: “Freedom to political prisoners”. Some protesters tried to escape as police moved in and smashed the windows of a police bus,  while in Almaty protesters were quickly taken away to police vehicles as they began chanting slogans against Chinese expansion and “Old man, go away!”

China is a major investor in Kazakhstan’s energy and mining sectors, but critics accuse some Chinese companies—as well as Western ones—of hiring too few local staff and paying them less than foreign workers. Rumours of corruption indulged in by Chinese investors and Kazakh officials also often result from Chinese investments.

The DVK is led by fugitive Mukhtar Ablyazov, a vocal critic of the Kazakh government who lives in self-imposed exile in France. Former banker Ablyazov is wanted by Kazakhstan, Russia and Ukraine on suspicion of embezzling some $5bn.

Teenage girl detained “going to the store”
Protest scenes captured by RFE/RL in Nur-Sultan included an unidentified woman who was filmed raising her hands in the air and saying: "We are peaceful, our hands are free." She was then taken to a police vehicle. Another scene shows a teenage girl being forcibly detained against her mother’s insistence that she was merely “going to the store” alongside her younger siblings.

Kazakhstan’s Prosecutor-General’s office had cautioned that people should stay away from the coordinated event, warning that law enforcement officers would take "strict measures to prevent illegal rallies".

"Destructive forces are... provoking a threat to social security by trying to incite social and ethnic discord. The Prosecutor-General's office calls on the citizens to strictly follow laws, stay away from provocations and abstain from taking part in the illegal actions and activities of organizations banned on our country’s territory," Deputy Prosecutor-General Berik Asylov said in a statement.

The Almaty-based Coalition of Civil Initiatives human rights group said on September 20 that about 50 activists had been fined or sentenced to jail terms between 7 and 15 days in the last five days in Nur-Sultan, Almaty and several other cities. They were sentenced on charges of organising or taking part in unsanctioned rallies earlier this month.

Kazakhstan’s food security hopes for the world undermined by food insecurities at home
NEO: Why copper mining must clean up its act
Kazakhstan: What next for restive mining village?

Kazakhstan’s food security hopes for the world undermined by food insecurities at home
6 hours ago
NEO: Why copper mining must clean up its act
8 hours ago
The birth of a Kazakh banking empire: ATF Bank
1 day ago
CEPR's action plan for Ukraine's wartime economy
1 day ago
Missiles or sabotage: What caused the explosion at the Russian airbase in Crimea?
4 days ago