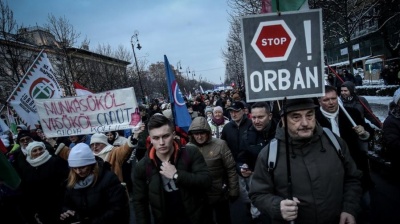 Five days of protests followed the adoption of the controversial legislation.
By bne IntelliNews December 16, 2018

Anti-government protests continued for the fifth day in Hungary against changes to the labour code and the establishment of new public administrative courts on December 16. Labour unions are planning road blockades across the country in the coming weeks.

On Wednesday, parliament voted to extend the period employers may account overtime for the purpose of calculating wages and rest days from twelve months to three years, and to raise the upper threshold for annual overtime from 250 to 400 hours.

Critics say the overtime law, dubbed as the "slave law" would essentially eliminate the need for employers to pay extra for overtime work, as the overtime hours could simply be offset later by off-time work. The opposition blocked the house speaker's dais and obstructed proceedings with loud whistling and jeering in an attempt to thwart the vote, leading to chaotic scenes unprecedented in parliament.

Wednesday's action marked a rare case of unity between opposition parties, who have failed to come up with issues to change the discourse from migration, a theme pressed by the government.

Later that day protests began in Budapest, where a few thousand people gathered in front of the parliament building.

On Wednesday and Thursday, the anti-government protests extending well into the night were marred by violence. A handful of protestors threw eggs and different objects at the riot police, which used tear gas to disperse the crowd. A dozen policemen were injured and some 50 people were arrested. Opposition parties said police unlawfully detained people at a popular bar in central Budapest.

The government said police acted lawfully and proportionately during the demonstrations. A government spokesperson called the demonstrations aggressive actions by a small minority rather than a sign of social unrest. Pro-government media, in an effort to undermine the credibility of protesters, are echoing the message that the demonstrators include activists on Hungarian-born US billionaire George Soros's payroll.

The size of the protests is far smaller than the big anti-government demonstrations after the April elections, which faded after two occasions. The protests this time are led by student and civilian groups, but on Sunday union leaders also took to the stage to blast the new rules, which are a seen as a big concession to the business sector that faces labour shortages.

Increasing overtime would only possible with the written consent of employees, but critics say workers may be pressured to agree with the new rules. The government says the rules would allow people who want to work more to earn more money.

On Sunday, speakers also voiced their concern over the establishment of the public administrative courts, a very contentious issue that raises questions over the independence of the judiciary.

The government tried to establish the courts dealing with issues related to public administration in 2016, but it was blocked by the Constitutional Court. The government dismissed fears that the new court would be packed with judges loyal to Prime Minister Viktor Orban’s government.

Dunja Mijatovic, the Council of Europe's commissioner for human rights, called on Hungarian President Janos Ader to return the law setting up administrative courts in Hungary to parliament for review. Under that law, the justice minister would have a strong influence over the courts, which raises questions regarding the independence of the Hungarian judiciary. The courts are scheduled to start operations on January 1, 2020.

After the end of speeches at Kossuth Square on Sunday night, thousands of protestors moved on to the headquarters of the state news television MTVA located outside the city centre. Opposition MPs handed over a petition, which included demands for scrapping changes in the overtime rules and the creation of public administrative courts, the independence of state television and a call for Hungary to join the European Public Prosecutor’s Office (EPPO).

A dozen MPs were allowed to enter the HQ of the state television on Sunday night. They spent the night in the building. In their live Facebook post MPs were seen surrounded by civilian guards of the television station, or consulting in the make-up room. The MPs attempted to reach the CEO of MTVA to have their petition read out.  A press conference is expected later this morning .

Since 2010 the state media has been the mouthpiece of the government and used to discredit political opponents.