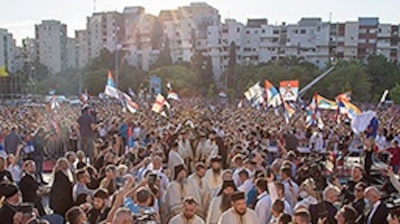 A group of protesters blocked the main road between Podgorica and the historic Montenegrin capital of Cetinje on September 4, ahead of the inauguration of the new head of the Serbian Orthodox Church in Montenegro on Sunday.

Clashes were expected as Montenegro’s population is divided over the inauguration plans in the city, which is seen by some as a threat of Serbian hegemony over the small country.

According to reports from the area, a group of people broke through a police blockade on a roundabout at the entrance to Cetinje. They then blocked the main road from the capital, building a barricade of tyres in an attempt to prevent people reaching the city for the inauguration of Metropolitan Bishop Joanikije II. The road has been clogged with traffic all day as thousands of people make their way to Cetinje.

A live broadcast by daily Vijesti showed that protesters clashed with the police to block the road, saying they want to stop Serbian Orthodox Church Patriarch Porfirije and Bishop Joanikije from getting to Cetinje Monastery to hold the inauguration ceremony. The monastery is believed to be the historic cradle of Montenegrin statehood.

Tensions escalated earlier on September 4, when Montenegro’s President Milo Djukanovic arrived in Cetinje to support those opposing the inauguration ceremony to be held in the monastery. Djukanovic said at the end of August that, unless the Serbian Orthodox Church gives up holding the ceremony there, he would personally go to Cetinje and try to prevent the inauguration.

His arrival was seen as support for protesters and was not surprising as Djukanovic’s Democratic Party of Socialists (DPS) took on the Serbian Orthodox Church back in 2019.

Before losing power in August 2020, the DPS tried to rein in the powers of the church with the controversial church law adopted in December 2019, but the law was overturned by the current government.

Joanikije II is to succeed the Serbian church’s previous most senior cleric in Montenegro, Metropolian Bishop Amfilohije, who died in October of coronavirus (COVID-19). The role of the Serbian Orthodox Church in Montenegro is a contentious political issue, and thousands protested against the planned inauguration in the run-up to September 5.

Meanwhile, international organisations expressed concerns over the escalating tensions in the country and called on the authorities to make efforts to calm down the situation.

“The United Nations (UN) is concerned about growing tensions and the rhetoric of divisions ahead of the enthronement of the Metropolitan of Montenegro and the Littoral of the Serbian Orthodox Church (SOC) on Sunday in Cetinje,” Peter Lundberg, the UN resident coordinator in Montenegro, wrote on Twitter.

“We call on everyone, especially those in positions of authority and influence, to make a direct contribution to calming tensions and building trust. As a UN member state, Montenegro has shown a strong commitment to inclusion, respect for different opinions and protection of human rights. This is the moment to remind us all of the importance of accepting diversity and mutual respect in the spirit of these common values,” Lundberg added.

The European Commission’s spokeswoman Ana Pisonero Hernandez also warned that “encouraging ethnic or religious divisions and intolerance is dangerous for the security and well-being of all citizens,” according to BalkanEU.com.

Top officials have appealed to Montenegrins to stay calm and keep the peace, but Djukanovic and Prime Minister Zdravko Krivokapic nonetheless traded barbs on Twitter during the day.

According to the programme of the inauguration ceremony, the Patriarch of the Serbian Orthodox Church, Porfirije, traveled to Cetinje from Podgorica on September 4, and Metropolitan Joanikije should officially take the throne on Sunday.

On September 4, at an official welcoming ceremony, Patriarch Porfirije delivered a speech, calling for unification and peace among people. He said that Joanikije’s election was legitimate and that he had all necessary qualities and dignity for the post.