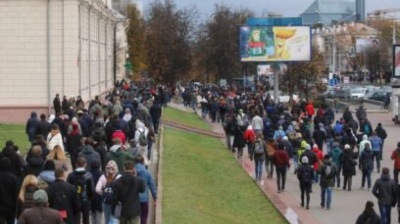 The number of demonstrators that turned out for the weekend Sunday rally in Minsk fell to only 10,000 but the marchers were careful to keep off the grass
By Ben Aris in Berlin November 2, 2020

The number of demonstrators that turned out for the weekend Sunday rally in Minsk fell to only 10,000 as the protest movement loses some of its momentum.

The weekly turnout for the “March against terror” was disappointing compared to the up to 200,000 demonstrators that marched a week earlier in the “People’s Ultimatum” demonstration.

The general strike, called for by opposition leader Svetlana Tikhanovskaya to begin on October 26, has largely failed, with most of the workers at the state-owned enterprises (SOEs) turning up for work the day after one of the largest rallies a week earlier. The start of the winter weather also contributed to the poor showing, but the protest movement seems to have lost a lot of its momentum as a result of the failure of the general strike to deliver a hammer blow to the Lukashenko regime.

The police were out in force and fired shots in the air and used stun grenades to disrupt the marches. In previous weeks the crowd has been so large that the police have been powerless to control the crowds, but with only 10,000 people on the street the police forces are sufficient to be effective and were able to prevent the various small columns streaming into the capital from uniting into a single column.

The falling numbers of protesters as the protests went into their 85th day is not a defeat for the protest movement but does leave the two opposing sides in a stalemate with no obvious resolution.

A general strike may have failed but industrial action and production disruptions continue at all the SOEs and are proving to be a major headache for Belarus' self-appointed President Alexander Lukashenko. The state has not been able to crush the opposition nor take back full control of the country either.

Lukashenko appears to be under pressure. He told security officers that demonstrators that come out to protest should have their “hands ripped off” and has reshuffled his top security aides this week as he looks for a way out of the impasse. But in a move that smacks of desperation he sent his three top aides to short up control of the western regions to safeguard against an invasion by NATO. Lukashenko has constantly referred to the “enemy at the gate” theme in an attempt to rally the populations support. However, while this ploy worked extremely well for Russian President Vladimir Putin in 2014 after the annexation of Crimea, in Belarus, where no such attack is imaginable, it plays out as a farce.

Despite their reduced numbers the mood of the crowd remained defiant at the weekend rally. Police are now regularly firing rifles into the air and using flashbangs and pepper stray against the protesters, who are unafraid. When the police shoot their rifles in the air the crowd responds with applause and continues its advance.

In one incident widely shared on social media, a group of OMON were retreating before a crowd of protesters walking towards them. One officer levelled his shotgun at a man in a red jacket, threatening to shoot. The man unzipped his jacket and bared his chest, shouting and challenging the office to fire.

Lukashenko: I am no enemy of the people

COVID-19 and Trump’s indifference helped human rights abusers in 2020
Belarusian government sees $2bn of withdrawals, issues $580mn worth of bonds in 2020
Lukashenko: I am no enemy of the people