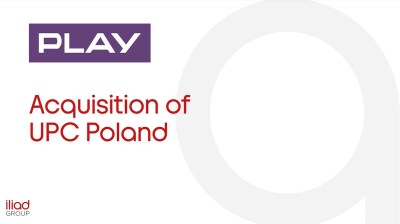 Play, the second-largest player on the Polish mobile communications market, is thus taking over Poland’s second-largest cable TV and internet company. Play generated PLN3.6bn in revenues and PLN1.7bn in EBITDAaL (operating profit increased by depreciation after factoring in leasing costs) at the end of June. Play has 12.3mn active customers.

UPC’s revenue came in at PLN900mn at the end of June. The company has over 1.5mn customers and covers 3.6mn households.

Following the deal, Play and UPC will be Poland’s second-biggest telecommunications company after Orange, Polish business newspaper Puls Biznesu reported. Other big players are Polsat Plus and T-mobile, although the latter does not own – nor does it seem to plan to take over – any cable company.

“The transaction proves that in the telecommunications market, vertical integration and the combination of mobile and fixed infrastructure is now one of two sensible strategies, apart from being a pure infrastructure operator providing wholesale services, such as Nexera,” Grzegorz Bernatek, an analyst for Audytel, told Puls Biznesu.

“This strategy … allows for cost-effective sale of a package of many different services on your own infrastructure, and customers are strongly interested in such packages,” Bernatek added.