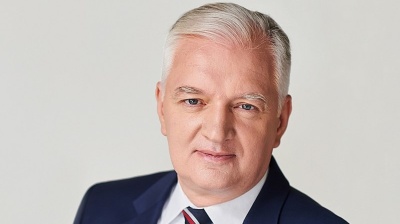 / Ministry of Science and Higher Education
By Wojciech Kosc in Warsaw August 11, 2021

Poland’s tripartite United Right coalition appeared on the edge of falling apart on August 10 after deputy Prime Minister and the leader of one of the ruling coalition parties, Jaroslaw Gowin, was dismissed for his criticism of the government’s flagship economic reform programme.

In a reflection of intricate dealings inside the coalition, however, it was not immediately clear if ousting Gowin would definitely mean that the coalition had no majority in the parliament and snap election was imminent.

Gowin’s party, Accord, is internally split and a group of its MPs could possibly remain in the coalition. The government could also retain the majority – feeble as it would be – by working with the government-friendly group Kukiz’15 and some independents.

Gowin has long voiced his scepticism on the so-called Polish Deal, the government’s plan to overhaul the tax regime, as well as incentivise innovation and investment. The ousted deputy PM has been all over the media in recent weeks, saying that the Polish Deal will burden Polish companies with heavier taxes, limiting growth possibilities and worsening the business environment.

“There’s no trust between Gowin and the government. [He] also fell short of fulfilling his duties in the government,” Muller said, announcing that a motion to dismiss the deputy PM was on its way to President Andrzej Duda.

“I [don’t think] that we will lose [our] majority … I am convinced that within the United Right and the rest of the Polish parliament there will be people who will support the beneficial reforms that we have proposed,” Muller also said.

Gowin’s reaction to his sacking – about which he learned from the media – was bitter.

“We were pushed out of the government coalition because we were faithful to its values,” Gowin told reporters, adding that “the coalition pledged it would not raise taxes”.

Gowin has also opposed the so-called “TVN law,” which PiS is currently pushing through the parliament and which aims at limiting non-EU ownership of the broadcasting media in Poland. That is commonly seen as targeting the US-owned TVN television, which is fiercely anti-government.