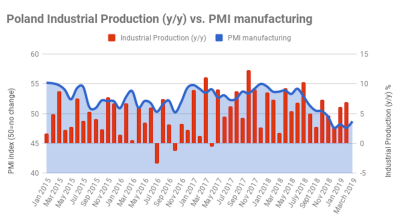 The indicator improved, bucking a downward trend evident in seven of the previous nine months while also lingering below the 50-point threshold for the fifth month straight.

“Output, new orders and employment all continued to decline, with new export work dropping at the strongest rate since June 2009. That said, the overall downturn showed signs of easing as production and new business both registered slower rates of reduction than in February,” IHS Markit said.

Inventories of finished goods built up at the strongest rate in 20 years in March, the index’s compiler also noted. Backlogs of work continued to fall in the eighth month running. That said, suppliers' delivery times lengthened further owing to shortages of raw material.

“It is unclear whether the Polish manufacturing sector turned a corner in March," IHS Markit’s Trevor Balchin said in a comment, pointing to slower declines in output and new orders and the 12-month outlook for production the strongest since September.

On the other hand, new export business, employment and purchasing all fell at faster rates while inventories kept accumulating in March.

"With the German manufacturing sector experiencing a stronger downturn in March, it is likely that Poland will continue to be impacted by the weakness of its western neighbour in the short term,” Balchin said.

The apparent weakness of the Polish industrial sector is yet to be confirmed by industrial production data for March, due later this month. But Poland's manufacturers appear resilient to the slowdown.

February industrial production figures surprised to the upside, accelerating growth to 6.9% y/y despite PMI improving only very insignificantly that month.

While there can be mismatches between individual readings of the PMI and the actual industrial production figures, the current consensus for the Polish economy forecasts an incremental deceleration of economic growth in Poland to still robust 4% y/y in the coming quarters.

Russian bond defaults could soar after US lets payment exemption expire
Ruble falls to below RUB60/$1, putting pressure on the Russian budget in 2022
Lira drags Turkey further down road to hell

Albania’s electricity generation fell in Q1, forcing the country to increase imports more than sevenfold at a time when prices are soaring.

Growth will be driven by tourism and construction, but slowed by sharply rising prices – inflation has already exceeded the central bank’s 3% target.

Polish retail sales grew 19% y/y at constant prices in April, the growth rate nearly doubling versus a gain of 9.6% y/y the preceding month.

Moldova’s industry up 3.3% y/y in Q3 driven by food, beverages and wood processing

Last year the country’s industry rallied driven by robust domestic demand and leapt up by 12.4% — but this year the growth rate is likely to slow down close to a standstill.