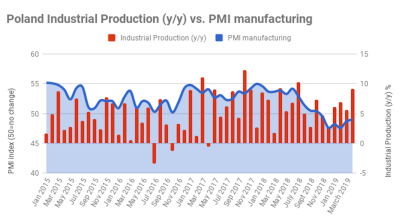 Polish industrial production grew by an unadjusted 9.2% y/y in April, data from statistical office GUS showed on May 22.

The headline figure is thus 3.6pp above the unadjusted figure recorded the preceding month attesting to the Polish industrial sector’s stubbornness to give in to negative trends in the external environment, especially the slowdown of activity in Germany, Poland’s biggest trade partner. That is a good sign for economic growth in the second quarter.

In adjusted terms, industrial production growth slowed down to still solid 6.5% y/y, 1.3pp below the adjusted annual expansion in March.

The somewhat surprising resilience of the industrial activity is also at odds with the weakened PMI, which improved slightly in April but still remained below the 50-point line – at 49 points - separating contraction from growth.

“Strong performance of industry can be attributed to increasing sentiment, [as] local manufacturing sentiment indicator and PMI went up in April, and positive calendar effect,” the Austrian bank Erste said in a comment to the figures.

Poland’s GDP expanded 5.1% in 2018. A flash estimate showed growth of 4.6% y/y – in unadjusted and adjusted terms alike – in the first quarter as well.

Broken down by sector, output in manufacturing grew an unadjusted 9.6% y/y in April, compared to 6.3% y/y in the third month. In the utility segment, production expanded 5.6% y/y after falling 3% y/y the preceding month.

In the water supply and waste management segment, growth came in at 12.7% y/y in the fourth month, compared to 10.2% y/y in March.

Production also managed an expansion of 3.3% y/y in the mining and quarrying sector in April, after expanding 4.7% y/y the preceding month.

In monthly unadjusted terms, industrial production fell 3.6% in April while inching up 0.1% m/m upon adjustment.