Polish GDP eases fall to -1.4% y/y in Q1 as consumption and investment grow 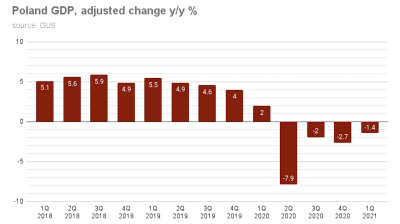 Polish GDP fell a seasonally adjusted 1.4% y/y in the first quarter after retreating 2.7% y/y in October-December, Poland’s statistics office GUS said in a preliminary reading on May 31.

The reading is an upward revision of 0.3pp versus the flash estimate published in mid-May. The mild contraction in January-March, which comes despite COVID-19 (coronavirus) restrictions throughout virtually the entire period, shows Poland’s economy is on track to a robust recovery in the second quarter and in 2021 overall.

“We revised our full-year GDP growth forecast up by 0.6pp to 4.8%,” Erste said in a comment on the GUS figures.

The state-controlled PKO BP predicts a surge in GDP growth to 5.1% or more.

In a surprise for analysts, investment also returned to growth, adding 1.3% y/y in January-March after collapsing 15.4% y/y in the fourth quarter.

Recovery in investment may owe to investments in sectors that did well during the pandemic, such as online retail, logistics, or IT, Bank Millennium noted.

Overall, domestic demand expanded 1% y/y versus a drop of 2.9% y/y in the fourth quarter, GUS said. Net foreign trade result contributed -1.9pp to economic growth in the first quarter (Q4: +0.1pp) on the back of slower than expected exports and a surge in imports, GUS also noted.

Positive trends, as seen in the breakdown of the data, are expected to continue.

“Pent-up demand and improving sentiment will boost household consumption, which we expect to further accelerate in the quarters to come. Investments could additionally benefit from EU funds available within the Recovery Plan in the second half of the year,” Erste said.

Poland’s GDP contracted 2.7% in 2020 in one of the shallowest recessions in Europe, although one that took place amidst one of the continent’s highest ratios of excess deaths.