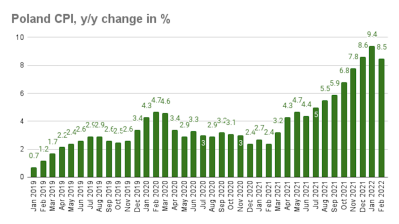 The easing is just temporary and inflation is expected to return with gusto, driven by the war in Ukraine, analysts say. Analysts predict Central European inflation will hit or approach double digits this year, partly because of Russia's invasion of Ukraine, posing a quandary for central banks as growth will also falter.

The February reading is an effect of the government’s so-called “anti-inflation shield,” a temporary reduction of excise duties VAT on fuels and energy, as well as VAT on food.

The effect of the shield was expected to be only temporary even before Russia’s attack on Ukraine. The war-driven volatility of the energy market will cut short any effect of the government measures and prices are most likely to begin climbing back up from March on, analysts say.

“The outbreak of the war in Ukraine significantly worsened the inflation outlook,” Bank Millennium said in a comment on the GUS release.

The war has already driven up oil prices and will boost prices of food on the back of reduced exports of grains, corn, or rapeseed from Ukraine, as well as the sanctioned Russia and Belarus, all being important producers.

The same three countries’ limited ability to export fertilisers will increase their cost, which is elevated already by expensive gas.

“The inflation environment will be unfavourable. What may lower the inflation path will be the probable extension of the anti-inflationary shield, declared by Prime Minister Morawiecki,” Bank Millennium said.

“Extending it until the end of the year should prevent double-digit inflation this year although double-digit readings could show up in individual months,” the bank added.

Surging consumer prices have pushed the National Bank of Poland (NBP) to raise interest rates six times in as many months since October from 0.1% to 3.5%. More tightening is expected in the coming months that will push the rates beyond 4%, the NBP said earlier this month.

The most-weighted category of food and non-alcoholic drinks drove CPI’s growth in February, the breakdown of the data shows. Food prices increased 7.6% y/y in February, compared to a growth of 9.3% y/y in the first month of the year.

In monthly terms, CPI fell 0.3% in February, the first monthly decline in the index since August 2020.

“We see full-year 2022 CPI at 9.7% with risks tilted to the upside. We expect the government to prolong the anti-inflation measures until the end of 2023,” Erste noted.

“The war in Ukraine constitutes both a negative supply and demand shock for the economy. The National Bank of Poland will be in a difficult position to balance the risks of inflation anchoring at an elevated level for a prolonged period of time with considerable slowdown of the economic growth,” it also said.

According to Erste, the NBP will continue tightening and the peak of the cycle will see interest rates at 4.75% by July 2022. A 50bp hike to 4% will take place in April.

Santander Bank Polska expect the NBP to get more hawkish with two increases of 75bp each that will inflate the reference interest rate to 5% as soon as in May.