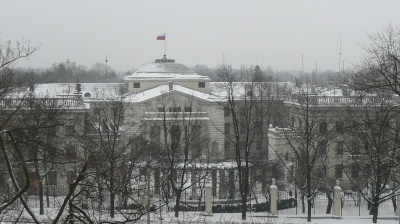 Poland will expel 45 Russian diplomats over alleged espionage for Moscow, the Ministry of Foreign Affairs said on March 23.

The move comes as Poland’s relations with Russia are at a long-time low following the Russian invasion of Ukraine in late February. Poland has since become one of the EU’s most hawkish countries, pushing for the harshest possible response to the war, including a ban on all trade with Russia, especially oil, gas, and coal.

Warsaw also wants a Nato-led peacekeeping mission to be deployed to Ukraine, an idea that it will tabled during the alliance’s extraordinary summit in Brussels this week.

“In total, 45 people with varying diplomatic status... were ordered to leave the territory of the Republic of Poland within five days,” foreign ministry spokesman Lukasz Jasina said, Reuters reported.

One of the expelled diplomats was given only 48 hours to leave, Jasina also said.

“[Russia’s] aggression against Ukraine proves that it is an unfriendly state, even hostile to Poland,” the spokesman added.

The Polish government has expelled the Russian diplomats following guidance by ABW, Poland’s counterintelligence agency, which said on March 23 that it identified 45 people as “officers of the Russian secret services and their associates who, while in Poland, enjoy diplomatic status”.

“The activities of the identified officers and persons cooperating with them serve to implement Russian intelligence projects aimed at the stability of the Republic of Poland and its partners on the international arena and pose a threat to the interests and security of Poland,” ABW said.