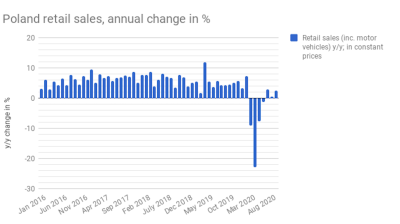 The reading is just above the market consensus, which expected an expansion of 2.4% y/y. A more vigorous than in August expansion of retail sales in September shows that the retail sector returned on track to recovery at the end of summer.

“Solid retail sales growth reflects a favourable situation on the labour market as well as improved consumer confidence throughout the summer. Since the collapse of the retail sector in April, we have observed a solid recovery and retail sales have already compensated the April’s losses,” Erste said in a comment on the figures.

In current prices, retail sales inched up 2.7% y/y in September versus an expansion of 0.4% y/y the preceding month. In monthly terms in current prices, turnover fell 1.8%. That followed a decline of 2.6% m/m in August.

“September’s real economy data proved that the economic rebound in the third quarter was solid and broad-based. Our now-casting model points to GDP contracting 3.8% y/y in Q3 but in our view risks are still tilted to the upside,” Erste said.

“On the other hand, the recent sharp increase in new COVID-19 cases and tightening of containment measures will weigh on the performance of the economy in 4Q20 and negative quarterly growth dynamics cannot be ruled out,” the Austrian bank added. Most other analysts of Poland's macroeconomic situation broadly agree with that outlook.

Hungary's PM risks isolation as Poland mulls dropping EU budget veto
Poland ready to back down from veto of EU budget
Poland’s PMI remains stuck just above the improvement line at 50.8 in November

Retail surpass pre-crisis peak as Romanians shop instead of holiday
1 day ago
Ukraine’s real wages up over 10% in October but have been stagnant in dollar terms for almost a year
2 days ago
Russian services PMI rises to 48.2, but remains underwater as recovery continues to slow
2 days ago
Poland’s PMI remains stuck just above the improvement line at 50.8 in November
3 days ago
Second virus wave ‘took wind out of Turkish manufacturing’s sails in November latest PMI shows’
3 days ago