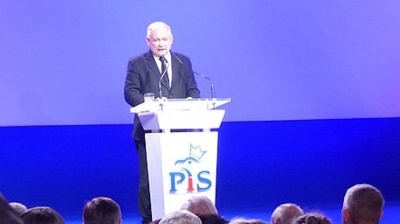 While expectable in an election year, the move still seem a direct reaction to recent consolidation of the opposition parties that have formed a so-called European Coalition to run against PiS in the European election in May. The coalition is level with PiS in the polls although its agenda is not much more than ousting the incumbent populists.

Announcing the plan has also given PiS a political initiative over opposition, which – while having adopted some of the PiS-favoured ideas like the universal child benefit – is unable to implement any promises it might make.

Tellingly, PiS has launched a video advert that is a compilation of older statements by Civic Platform (PO) politicians – Poland’s former ruling party – saying the so-called 500+ child benefit, PLN500 (€115) paid per most children in Poland, was impossible and irresponsible to introduce.

Yet the benefit was indeed delivered by PiS and while its cost runs over PLN20bn each year, Poland’s economic growth – 5.1% in 2018, the fastest since 2007 – easily allowed it. The benefit – first of its kind in Poland – changed Polish politics, contributing to PiS' victory in the 2015 election and keeping the party top of polls since.

The new spending plans amount to some PLN30bn-40bn and are risky, some economists and analysts say. Poland’s economy is expected to slow down to 3.5% in 2019 and the election-driven fiscal stimuli will lead to an increased deficit, they claim.

The changes include extending the monthly benefit of PLN500 also for the first child without the income threshold, starting in July, introducing an extra annual payment for pensioners of PLN1100, no personal income tax for employees under 26 years, as well as lower tax payments for other employed.

Prime Minister Mateusz Morawiecki said the cost of the changes would be financed through further sealing of the tax system and cutting administrative costs. He also said more promises would be made in June and July.

“Such an increase in spending implies that this year's deficit could reach the legal threshold of 3% of GDP, compared to the planned 1.7%, according to RBI.

“The money for all these pledges is already earmarked in this year’s budget,” Michal Dworczyk, the head of the PM’s office, told the PiS convention during which the party made the announcements.

“Proposed solutions constitute a strong fiscal impulse of around 2% of GDP. They will increase consumption, which will boost economic growth in the second half of the year and in 2020,” Bank Millennium wrote.

“However, the proposed spending plans will deteriorate public finances and expose Poland to the relaunching of the EU’s Excessive Deficit Procedure,” the bank added.

Pro-inflationary spending stimulus is also expected to increase the likelihood of an interest rate increase although the dominating scenario remains that of stable monetary policy until the end of 2020 at least.

PiS polled in at 38.5% in the most recent poll, carried out by Estymator on February 20-21 and published on February 23, before PiS’ convention. The European Coalition – composed of PO, agrarians from PSL, the centre-left SLD, and smaller liberal and left parties – followed with 33.4%.