Poland’s inflation reaches 2.4% y/y in May 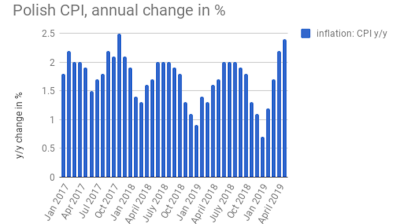 Inflation is expected remain at around 2.4%-2.5% y/y in June before easing to 2%-2.5% in the second half of the year, despite core inflation accelerating.

“The underlying structure suggests a further gradual acceleration of core inflation in the next few months, supported by increases in telecommunication and package holidays prices,” ING said in a comment on the GUS figures.

That should be offset by lower contributions from fuel and energy. “We also expect food prices to decelerate after the summer,” ING said.

The May inflation reading gives the Monetary Policy Council (MPC) little ground to change the currently record-low interest rate of 1.5%.

The MPC has now kept the interest rate unchanged for over four years. Most analysts expect no changes in Poland’s monetary policy until the end of 2019 unless new and unexpected factors come into play.

The MPC’s head and the governor of the National Bank of Poland Adam Glapinski has hinted a number of times that interest rates might remain unchanged even until the end of the MPC’s current term, which ends in 2022. The current macroeconomic context is perfect for Poland, Glapinski keeps saying.

The annual CPI growth in May was driven by rising prices of the most-weighted segment of food and non-alcoholic drinks, which increased 5% y/y, compared to 3.3% y/y in March.

Prices in other heavily weighted segments of housing and transport increased 1.6% y/y and 1.7% y/y, respectively. That compares to housing prices expanding 1.6% y/y in April as well while growing 4.8% y/y in the transport segment.

Several countries in Central Asia, the South Caucasus and the Western Balkans are seeing a strong rise in daily new cases after the easing of restrictions.