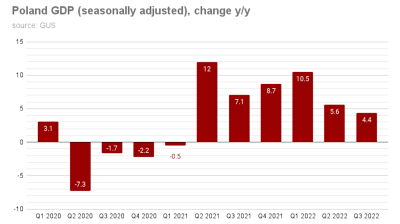 Polish GDP expansion slowed down to a seasonally adjusted 4.4% y/y in the second quarter (chart) after a revised growth of 5.6% y/y in the preceding three months, the Central Statistical Office (GUS) said in a flash estimate on November 15.

While still fairly strong, the reading – which came in slightly above the consensus line – confirms earlier analysis that falling inventories were about to weigh on economic activity in the second half of the year after strongly pushing up growth in Q1.

“The economy has entered a slowdown phase and the reversal of the inventory cycle deepened the decline in GDP growth,” PKO BP said in a comment.

GUS’ flash estimates do not provide a detailed breakdown of growth drivers, which will be published at the end of the month.

Analysts are nearly certain, however, that apart from inventories, private consumption growth eased considerably from 6.4% y/y in Q2 to just 1.6% y/y in the third quarter. A slowdown in investment growth also seems likely.

That said, the economy still proved more resilient than expected in the third quarter, pushing a truly negative scenario further down the line to the fourth quarter or beyond.

“Taking Q3 results into account, this year's GDP growth may reach 4.8%. However, the following quarters will bring a clear slowdown,” Bank Millennium noted.

“In the first months of the next year, annual GDP growth will be negative, even though economic growth in the entire 2023 should be positive but will not exceed 1%,” Bank Millennium added.

GDP growth slowing down also strengthens forecasts that what the National Bank of Poland called a “pause” in monetary policy tightening is, in fact, its end.

The NBP held rates at their longtime high of 6.75% for a second consecutive month in November, citing concerns over the tightening’s impact on the economy.