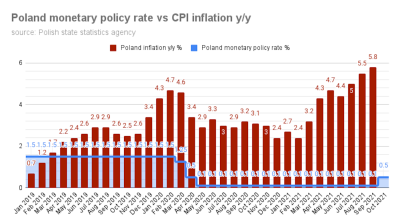 The National Bank of Poland (NBP) hiked its reference rate by 40 bps to 0.5% on October 6. The move comes as a surprise as the market had predicted a hike in November that would coincide with the central bank’s new projections of inflation and economic growth. But fast-accelerating consumer prices, which climbed to 5.8% y/y in September – a 20-year high – has pushed the rate setters to ending their dovish stance earlier than expected.

Poland has now followed Hungary and the Czech Republic – after a lag of four months – in reacting to rising inflation in Central Europe caused by higher energy prices and a rebound from the COVID-19 induced recession.

“This is likely to mark the start of quite an aggressive tightening cycle to bring inflation back to the central bank’s target,” Capital Economics said in a comment.

“It seems that the larger-than-expected rise in inflation … was too much to stomach for even the more dovish members on the Monetary Policy Board,” the London-based analysts added.

The elevated inflation resulted, to a great extent, from factors beyond the control of domestic monetary policy, the NBP said in a statement, but added that “amidst probable further economic recovery and favourable labour market conditions, inflation may remain elevated longer than expected.”

That was, according to analysts, the key language in the NBP’s communiqué.

“Such a situation would generate a risk of inflation staying above inflation target in the medium term,” the central bank said, justifying the hike.

Commentators point out that the NBP’s statement was unusually short and skimpy on details as for an unexpected, even if small, change in the course of monetary policy of the region’s biggest economy.

“Governor Glapinski’s press conference on Thursday now has much greater significance. The key question is whether Mr. Glapinski and the other dovish members of the MPC have changed their tune on inflation risks or whether today’s rate hike reflects the more hawkish members clubbing together to out-vote the doves,” Capital Economics’s Liam Peach wrote.

Following the hike, which brings the interest rates back to the level last seen in April 2020, the NBP’s next moves seem hard to predict, Erste says.

“The CPI will soon surpass the 6% y/y margin and … should gradually move toward the upper bound of central bank’s target. Recent developments of energy prices and subsequent announcement of electricity and gas prices increase for households could push inflation further up, implying a need for more reaction from the side of the NBP,” the Austrian bank wrote.

“On the other hand, the central bank remains concerned over rising infection rates and its impact on the economic activity,” it added.

Even though the central bank’s new strategy should become clearer only after Glapinski’s conference on October 7, the rate hike already “reduces the risk of deepening capital disallocation, imbalance in the housing market and de-anchoring of inflation expectations,” Poland’s state-controlled bank PKO BP said.

According to Erste, markets are currently pricing-in another 40 bps increase at the next meeting and up to 140 bps increase by mid-2022. Capital Economics pencils in a hike to as much as 2% next year.

Bank Millennium, in turn, sees “major risks” to its 1% interest rates outlook for 2022 but without giving a new prediction on how hawkish the NBP is going to become.

“Glapinski has repeatedly emphasized that the withdrawal from the accommodative policy cannot be carried out in a way that threatens economic growth. However, a series of rate hikes by 25 bps in the following months is possible due to the probable inflation exceeding another important thresholds - 6% in October and approaching 7% at the turn of the year,” Santander Bank Polska said.

First official results from Bosnian elections put nationalists ahead after exit polls predicted losses
19 hours ago
Georgian MPs want to rid the country of oligarchs, but not all of them
20 hours ago
Hungary agrees on deferred payments with Gazprom for winter gas deliveries
20 hours ago
US sanctions Russia’s CBR head Nabiullina and other officials
20 hours ago
Russia prepares for new attacks against Ukraine from Belarusian territory
20 hours ago