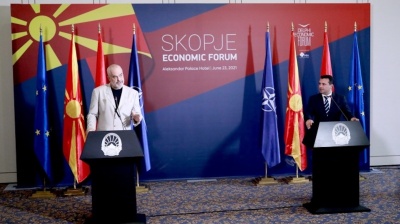 The prime ministers of Albania and North Macedonia, Edi Rama and Zoran Zaev, said on June 23 that the EU failed to deliver on its promises even though the both countries met conditions for the launch of EU accession talks.

Zaev and Rama were speaking at a joint news conference following the Economic Forum in Skopje, one day after EU ministers failed to give the green light for the promised negotiations due to the Bulgarian veto on North Macedonia, which also blocks Albania's EU accession progress. The two countries have been coupled together in the process and are not likely to be decoupled.

“The big visionary idea of a united Europe encounters a problem today, and the problem is the EU itself. Brussels has told us that the EU is failing to find a way to ensure the deserved integration of the Western Balkans. The fact that 26 EU member states fail to prevent a blockade of one member state is a problem of Europe caused by the EU itself,” Zaev said at the news conference.

However, Zaev stated that the country will continue to work to achieve the European values.

“We are here with Prime Minister Rama to announce that we will bring our nations even closer,” Zaev said.

“Everyone in the EU, which has accepted and promoted these values as an integral part of the European way of life, should know that no one should call into question human dignity, equality and solidarity, the rule of law and human rights,” Zaev said.

He added that the European integration must not be held hostage to bilateral issues.

“The EU can set conditions, deadlines and dates for the integration process. But the EU can determine neither our location in the middle of Europe, nor our culture and identity, nor the future of our peoples as European nations in the European family,” Rama said at the news conference.

Asked by a journalist how long Albania will tolerate the block on the country’s accession progress, caused by the Bulgarian veto on Skopje, Rama replied that the problem is not North Macedonia, but the EU itself.

”It’s not the first time they have failed to give the opportunity for the first intergovernmental conference. It’s more or less like a wedding, where everything is done right and in the end the bride does not show up. We will continue to move forward, to do our job,” Rama said.

The European Council meeting is scheduled for June 24-25, when the issue of EU enlargement will be discussed again, but no progress is expected.