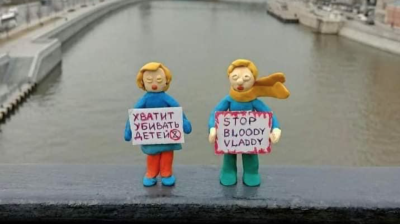 Russian art activists continue to protest against the invasion of Ukraine by placing small figures holding anti-war placards across the country.

The movement has been nicknamed “mini pickets” and features plasticine figures set up in public places displaying cards reading “Stop Bloody Vladdy” and “No War”. According to Twitter user Max Fras, the creative protest began in Saint Petersburg and has since travelled to numerous regions of Russia.

The Russian state has strict rules regarding protests and unauthorised demonstrations have been a criminal offence since 2014. Nevertheless, this did not deter anti-war protesters from taking to the streets at the start of the Russian invasion on February 24.

More than 4,300 people were detained during protests in 56 cities across Russia, the OVD-Info rights group reported on March 7. Some 1,700 people were detained in Moscow alone and another 750 in St Petersburg, according to the interior ministry. Tens of thousands of people have been arrested for protesting against the war since it began.

Although street protests have quietened down in Russia, activists across the country are finding unique ways to spread their anti-war message. Artist Sasha Skochilenko was arrested after replacing price tags of items in supermarkets with information about Russian military aggression in Ukraine. In one instance she printed text on a jar of coffee reading: “The Russian army bombed an art school in Mariupol. Roughly 400 were sheltering there from military fire”.

The group garnered significant attention at the start of April after placing homemade graves in regions across Russia as part of a project called “Mariupol 5000” bearing information about the thousands of citizens killed in the besieged Ukrainian port city.

“We propose to go out into the courtyard of any house and install a homemade cross with a sign in memory of those who died in Mariupol. We want to try to install 5,000 crosses all over Russia”, FAS Tweeted on March 31. “You can write text on a fixed plate (...) ‘Russian troops killed 5,000 civilians in Mariupol. Now the dead are buried in the courtyards of their houses. This is a war, not a special operation.’” 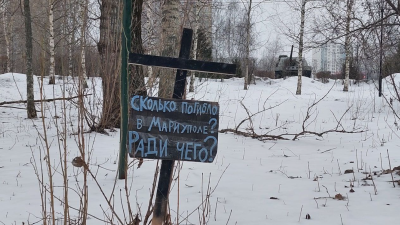 It is not known if FAS is behind the “mini pickets” operation.