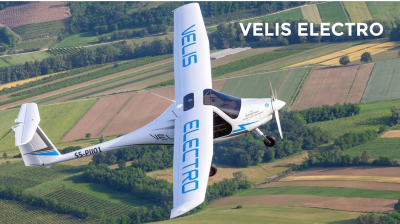 The Velis Electro aircraft can be recharged from a solar array in an hour. / Pipistrel
By Kester Eddy in Ajdovščina in western Slovenia November 18, 2022

The world's first commercial, all-electric aircraft fully certified to carry passengers is now in service, and offering regular flights typically priced at around $100.

But the Velis Electro takes off not from some exotic airfield in sun-drenched California, nor even locations associated with innovative aviation such as Paris or Farnborough, but from a grass strip in a tiny village with the fairy-tale name of Shipmeadow, near Norwich, eastern England.

And if this unique aeroplane's current operations' centre seems unlikely, it is the product of an even more unlikely country: Slovenia, an Alpine state with a population just 1.9 million.

“Our passengers go, 'Where? You mean it's from Slovakia?' I say no, Slovenia. It's the part of what was Yugoslavia, the nearest bit to Italy,” says Sergey Grachev, CEO of Nebo Air, the company he co-founded to introduce the Velis Electro from Shipmeadow to the UK, and later, the world.

But perhaps it's better to dispel any myths before they take root; nobody is flying from an East Anglia grass strip to exotic global locations any time soon. The Pipistrel Velis Electro has the endurance for about one hour's flying time (plus 20 minutes for emergencies), and it can only carry a pilot and one paying passenger.

But “paying” is key: the Velis Electro is, crucially, “type certified” in aviation speak, meaning the authorities deem it as safe as any Boeing or Airbus product for use in commercial aviation.

As such, it is pioneering a new age of flight: one that is green – the aircraft can be recharged from a solar array in an hour - and cheap.

“The fuel cost to fly the Velis Electro for an hour is about €2. For one hour of flight on a [similarly light] Cessna 152 for example, you need 30 litres of fuel, which nowadays costs around €60. So, €60 compared to €2! And if you use your own charging system, it's effectively free,” Ivo Boscarol, the founder of Pipistrel, tells bne IntelliNews in an interview.

In addition, though this is not initially obvious, its most important attraction is silence – a fantastic advantage in a world ever more concerned about noise pollution.

“We are bringing back flight to airports in urban areas where it has been forbidden. We have more than 120 airports across Europe, in Austria, Switzerland, Belgium, France, which are closed because of local civil initiatives over noise. … But with the Velis Electro, if you don't see the aircraft in the air, you don't know it's there,” Boscarol adds, eyes alight with enthusiasm.

As a result, the demand for the aircraft, which sell for some €200,000 apiece, is growing, for leisure, private travel and early training of professional pilots.

“All the [flying] schools – and we are selling six to seven aircraft a month –  the schools are buying our aircraft because of noise,” he says. “We are revitalising general aviation airports which have been closed. Noise is the main point today.”

Most notably, the Velis Electro has already caught the attention of the UK's Royal Air Force, which is evaluating the aircraft for possible use as a trainer.

But how has a small company, based in rural western Slovenia, come to lead the world in such a niche product – all the more so since the founder is an economist, with no formal aeronautical education, except for gaining a licence as a glider pilot in 1975?

Almost like a Boys Own adventure, Boscarol, after smuggling an early motorised hang-glider by parts into then Yugoslavia for personal use, began a garage business building modified Italian “trikes” (as he dubbed them) using the modified two-stroke engine in East German Trabants for the power unit. Initially this was for friends, but as word got round, demand grew.

But in the early 1980s, both building and flying such machines was, legally, unchartered territory. To solve such problems, Boscarol cooperated with like-minded enthusiasts across Europe to found a new class of aircraft (now usually termed micro-lights), and meanwhile set off for Belgrade to seek a manufacturer's licence from the state.

Officials at the Yugoslav aviation authority could not believe their ears. “They were laughing. 'What, you want to produce aircraft? … Only big companies can do this.' But finally, I got the licence, I was the first aircraft producer in all the Balkans!” he recalls – though this latter claim is somewhat disputed.

As his 'trike' sales began to take off, selling as far as The Philippines, Boscarol started thinking of more sophisticated designs. To allow his aircraft to fly for more than a few weeks in summer, he needed an enclosed cockpit.

But even with a classic combustion engine, Pipistrel (the name comes from the Latin for 'bat') aircraft from the outset embodied one over-riding philosophy: they were designed as a glider, light and with minimal drag. It means the final products have astonishingly low fuel consumption.

Slowly but methodically, Boscarol built up his team: in 2007, a Pipistrel aircraft won five of seven challenges in a NASA-sponsored global competition for efficient light aircraft. Prizes included the best miles per gallon award and the shortest runway usage. The Pipistrel team repeated the victory at the second NASA competition a year later.

As Boscarol can boast: “Our aircraft, with just 300 litres of fuel, can fly from Chile to Easter Island, that's 4,600 km with no possibility of landing. It's science fiction for all our competitors. It's because all our aircraft are designed according to glider philosophy, even if they are powered.”

By the beginning of 2022, a mix of some 2,500 Pipistrel aircraft were flying border patrols, policing game reserves and enabling low-cost pilot training from Asia to the Americas.

Meanwhile, the company's 250 people in Slovenia (plus an assembly plant in neighbouring Italy) were producing 200 aircraft per year, roughly one per working day.

Boscarol had, and still has, the vision for an explosion in air transportation, based on new battery technology and computer-controlled navigation. But equally, he knew development and certifying costs were rising exponentially.

“Pipistrel is very good at innovation, we started all this, but I knew that with our €40m in turnover, we didn't have the financial capabilities to go forward alone,” he says.

As a result, in April he sold a controlling stake in Pipistrel to US aviation giant and former competitor Textron for €218m.

The sheer muscle of the new owner opens up a new chapter in the life of Slovenia's leading aircraft producer. Textron has promised to “accelerate Pipistrel’s development”, retain the name as “a distinct aviation brand within Textron” and expand facilities in Slovenia and Italy.

For Boscarol, the sale has given hope for the future. “The development of fly-by-wire systems, of auto-pilots, the certification of pilotless aircraft is so expensive that we are talking about billions, not hundreds of millions,” he says.

But with Textron behind his creation, he reasons “Pipistrel's history will go forward. Otherwise, tomorrow, I fear, we would have disappeared.”