PANNIER: Kyrgyzstan and Tajikistan are only talking at each other. Another conflict is looming 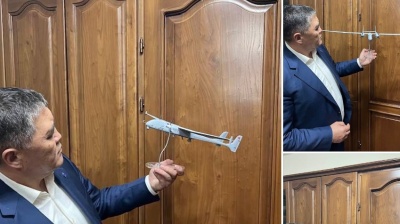 In an aggressive move, Kyrgyzstan’s security chief Kamchybek Tashiyev posted photos on Facebook of himself admiring a model of a Turkish-made Aksungur military drone. / Cropped from Facebook.
By Bruce Pannier November 9, 2022

A week ago, Kyrgyzstan’s security chief, Kamchybek Tashiyev, posted photos on Facebook of himself admiring a model of a Turkish-made Aksungur military drone. The message, in English, “Now ‘Aksungur’ is ours too,” was written above the photo.

A picture truly can say a 1,000 words sometimes—this particular picture was meant to, all at once, reassure Kyrgyz citizens, warn Tajik authorities and send the message that if another battle breaks out along the Kyrgyz-Tajik border, it will be more deadly than the last confrontation.

And the current mood in the two countries suggests that there will indeed be a next time.

The Kyrgyz and Tajik militaries fought each other in late April 2021 and again in mid-September this year. There have been tensions along the two countries’ frontier for many years.

Ten years ago, when the tensions boiled over, the result was villagers on both sides of the border throwing sticks and stones at each other. During the four-day war in September, there were exchanges of mortar and artillery fire, Tajik rockets landed near the airport in Kyrgyzstan’s provincial capital Batken and Bayraktar drones that Kyrgyzstan purchased from Turkey in 2021, following the April Kyrgyz-Tajik conflict, were used against targets in Tajikistan.

In another sign of how the armed exchanges have escalated, in the latest showdown at least 134 people were killed in less than 72 hours, compared to the 54 killed in the April 28-30, 2021 fighting.

There have been dozens of incidents along the Kyrgyz-Tajik border in the past 10 years. The root of the problem is border areas that are still not demarcated, more than 30 years after the two post-Soviet countries became independent.

In the past, when there were clashes, local officials from both countries usually quickly arrived to defuse tensions. They were then followed by higher-ranking officials who quickly arranged a truce and implemented measures to alleviate tensions.

These things did not happen after the September war broke out. 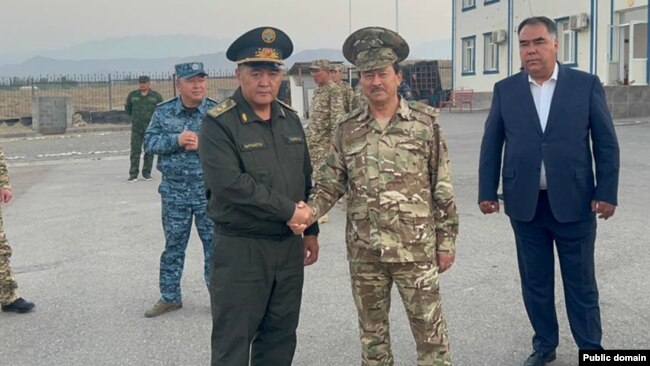 The shooting finally stopped late on September 17 and, from September 19-20, the head of Kyrgyzstan’s State Committee for National Security, Tashiyev, and his Tajik counterpart, Saimumin Yatimov, met to sign agreements meant to stabilise the situation along the border, as they did following the conflict in 2021.

But this time, away from the negotiation table, the comments from other officials on both sides of the border were not about peace or reconciliation.

On September 18, Kyrgyzstan’s Foreign Ministry said Tajikistan had carried out an act of armed aggression, had crossed into Kyrgyz territory and briefly occupied several Kyrgyz villages.

At a press conference in Dushanbe on September 19, Tajik Deputy Foreign Minister Sodik Imomi accused Kyrgyz troops of conducting targeted strikes against civilian infrastructure in Tajikistan and claimed Kyrgyz reinforcements and heavy weaponry had not been withdrawn from the border area as agreed and that “their presence there leaves no doubt that all their [Kyrgyz] thoughts are only about violence.”

On September 20, Kyrgyzstan’s Foreign Ministry called Imomi’s comments “reckless” and said: “Despite all the clumsy and absurd attempts of the Tajik side to mislead the world community, the inhumane armed aggression committed by Tajikistan against Kyrgyzstan… remains a fact.”

The mutual accusations and recriminations continued. The secretary of Kyrgyzstan’s security council, Marat Imankulov, claimed that there were Afghan militants on the Tajik side and other Kyrgyz officials made reference to bearded men in black clothing taking part in the fighting.

Kyrgyzstan’s Foreign Ministry described that statement as “an attempt ... to destroy the fragile peace that with great efforts manages to sustain between the parties.”

The war of words subsequently eased—until the announcement on October 4 that Russian President Vladimir Putin was to bestow the “Order of Merit for the Fatherland” to Tajik President Emomali Rahmon for the latter’s service to preserving regional stability.

Kyrgyz parliamentary deputy Chyngyz Kustebayev wrote on his Facebook page: “What kind of regional security can we talk about, when from year to year the actions of the leadership of Tajikistan in the region undermine peace and harmony between the peoples of the countries of Central Asia?”

The next day, Shohin Samadi, the Tajik Foreign Ministry’s press secretary, responded on his Facebook page, writing that “after the armed aggression against Tajikistan, and in order to cover up their criminal actions, the Kyrgyz authorities launched a powerful information attack against our country, accompanied by unconfirmed facts and heinous lies, which still hasn't stopped.”

Kyrgyzstan’s Foreign Ministry stepped in again, with a reply that urged Tajikistan “not to create an atmosphere of intolerance.”

Then, on October 19, the Tajik border guard service claimed Kyrgyzstan was bringing reinforcements to the border area and fortifying firing positions. It added that between September 26 and October 15, Kyrgyzstan had violated Tajik air space 13 times by sending reconnaissance drones over Tajik territory. The guard’s statement included photos, allegedly of placed equipment and improvements to military positions along the border.

Kyrgyzstan’s border guard denied the accusation, countering that since September 25, on the Tajik side of the border, there had been the preparation of new firing positions and the digging of trenches. The guard added that Tajik reconnaissance drones had flown over Kyrgyz territory 10 times.

While all this was happening, there were reports that Tajikistan was buying military drones from Iran—which was interesting since, in May, the chief of Iran’s armed forces, General Mohammad Bagheri, visited Dushanbe to attend the opening of a factory that will produce Iranian Ababil-II military drones.

There were also reports that Kyrgyzstan was purchasing a Pechora-2BM anti-aircraft battery from Belarus for use in the Batken area.

And then Kyrgyz security head Tashiyev posted that Kyrgyzstan had acquired Aksungur drones from Turkey.

The two sides are not talking to each other. They are talking at each other, continuing to ratchet up tensions as they increase their military capabilities along the border.

Kyrgyzstan has appealed for outside mediation, but no one has appeared particularly interested in getting involved in the dispute.

The course of events, as they stand now, suggests another military conflict is coming. Fifty-four people died in the April 2021 fighting and 134 in the latest conflict this year. And now both sides are better armed.

PANNIER: A very Turkmen coup
2 days ago
OPINION: Bulgaria sets itself a tough task with Burgas-Alexandroupolis pipeline revival
6 days ago
NEMETHY: Is Ukraine War the beginning of World War III?
6 days ago
RIDDLE: The Russian army in 2023
7 days ago
‘Yesterday’s strategy won’t do’ in Europe’s approach to Iran says Carnegie analyst
11 days ago