PANNIER: Is there a plot for a fourth revolution in Kyrgyzstan since 2005? The authorities say it is so 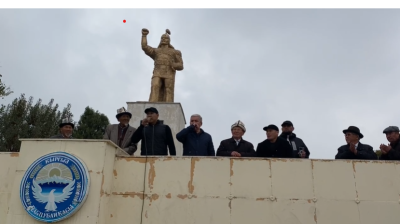 The tension is producing rallies and counter-rallies. Here a speaker defends the land border agreement struck by the Japarov administration with Uzbekistan. / Screengrab from 24.kg news video.
By Bruce Pannier October 27, 2022

The pot is boiling again in Kyrgyzstan. Faced with growing criticism over the terms of a long-awaited border agreement with neighbouring Uzbekistan, the government of Kyrgyz President Sadyr Japarov is detaining opponents of the deal and has shut down the website of at least one major media outlet. And some people inside and outside Kyrgyzstan are wondering if the country is headed towards another revolution.

In the early morning of October 23, police in the Kyrgyz capital gathered in such large numbers of detainees that some policemen reportedly wondered if war had broken out. There was no war. The police were sent to raid the homes of at least 22 politicians, activists, bloggers and journalists. Police detained those targeted, searched their homes and confiscated computers and mobile phones.

Those detained were critics of the government’s announced agreement with Uzbekistan that would place the Kempirabad reservoir in Uzbek territory. Government officials said they consulted with people in the affected area before offering the reservoir to Uzbekistan in exchange for previously disputed land being given to Kyrgyzstan.

But some residents of southern Kyrgyzstan’s Uzgen district, located in the Kempirabad reservoir area, seemed surprised. On October 15, they organised a kuriltai, a meeting of community leaders and local residents, and denounced the agreement. The group voted to establish a committee to keep the reservoir as part of Kyrgyzstan. On October 21, people from several villages in

President Japarov described them as “paid” protesters and said that he believed “99.9 percent of people support” the government’s proposed settlement on the border in the Kempirabad area  .

The day before the raids, former lawmaker Ravshan Jeenbekov posted on his Facebook page a list of 20 people, himself among them, who were on the committee to protect the Kempirabad reservoir.

Those detained are accused of plotting to organise mass unrest in Kyrgyzstan. All appeared in Pervomai court for a series of trials that started on the evening of October 24 and lasted until 0530 local time on October 25.

The court ordered all the defendants to be held for two months, except for activist Atay Beyshenbek, who suffered heart problems during his trial.

The office of Kyrgyzstan’s ombudsman released a statement listing procedural violations in the trials. The defendants were said to have not known what charges were being pressed against them until they were in the courtroom. Journalists were barred from attending the trials.

Karasartova said plainclothes policemen who arrived at her home did not identify themselves and did not show her a search warrant. A video of Karasartova trying to keep police from entering her apartment was widely posted on Kyrgyz websites.

Another video shows detained activist Ali Shabdan at Pervomai police station in an argument with a policeman, identified as Sharshen Suranchiev, who tells Shabdan, “You are going to die now boy. You will fall and not get back up.”

On October 26, the Ministry of Culture informed Radio Free Europe/Radio Liberty’s Kyrgyz service, known locally as Azattyk, that their website was being taken down for two months. The reason given was Azattyk’s refusal to remove a video about the brief Kyrgyz-Tajik war that took place in September. The Ministry of Culture stated that it “elements of hate speech, unconfirmed information about an alleged attack by the Kyrgyz side on Tajikistan, information that escalates the situation in society and causes hatred, discrimination and division among citizens…”.

Azattyk had been reporting on the controversial land deal with Uzbekistan, the protests against the proposed agreement and the detentions of the politicians, activists and journalists, but so had other Kyrgyz media outlets that are still operating.

Parliamentary deputy Nadira Narmatova was accused earlier in October of collecting signatures calling for the closure of Azattyk, and the independent Kyrgyz news websites Kloop and Kaktus Media. Narmatova denied the accusation but a little later it came to light that she owned a building in Osh that housed the Russian consulate, Narmatova kept a low profile and no more was heard about the signature campaign.

Several parliamentary deputies have criticized the detentions. Among them are veteran politicians Iskhak Masaliev and Butun Kyrgyzstan party leader Adakhan Madumarov, who leads the opposition faction in parliament. Both are also on Jeenbekov’s list as being members of the committee to protect the Kempirabad reservoir.

Additionally, Madamumarov and the current GKNB chief, Kamchybek Tashiev, are bitter political rivals. The border guard service is part of the GKNB and Tashiev has been one of the prime Kyrgyz negotiators in border talks held with Uzbekistan, and also with Tajikistan. During an early June argument in parliament between Tashiev and Madumarov, which did not concern border agreements, Tashiev threatened to break Madumarov’s arm and throw him in jail.

President Japarov has tried to ease complaints about the border deal by pointing out that under the proposed land swap agreement with Uzbekistan, Kyrgyzstan is actually gaining more than 18,000 hectares of land that will be added to the Osh and Jalal-Abad provinces in exchange for a reservoir that Kyrgyzstan will still co-manage with Uzbekistan, meaning it will continue to supply water to Kyrgyz citizens.

After the October 23 detentions, there were rallies in Uzgen district, and in the northern city of Tokmok, in support of Japarov.

The authorities say they have a recording of phone conversations between some of those detained in which there are discussions on using the reservoir issue as a means to foment unrest and oust Japarov and his government.

Supporters of those detained say the recording has been spliced and edited in an attempt to frame the suspects.

A standoff has begun and tensions on both sides are rising.

Uzbek President Shavkat Mirziyoyev was due to visit Kyrgyzstan in the very near future. There were expectations that the agreement on the border area by the Kempirabad reservoir would be signed and sealed during the visit. Russian newspaper Kommersant reported on October 26 that “diplomatic sources” said Mirziyoyev’s visit had been postponed.

It does seem that despite Japarov’s claim that “99.9 percent” of Kyrgyzstan’s people support the land swap deal, there is still significant resistance to the plan.

The detention of so many well-known figures, the allegations of multiple violations committed during searches of homes and the court proceedings are setting the stage for another round of unrest in Kyrgyzstan, a country that has seen three revolutions since 2005.

Foreign investment has transformed Eastern Europe, says wiiw report
10 hours ago
Will Croatia’s latest shot at World Cup glory ease economic slowdown?
1 day ago
Belarus’ government to expand political-economic control at the expense of economic growth
1 day ago
Sino-Russian ties continue to deepen as Western sanctions drive their economies together
2 days ago
War and wine: how rattled economies in Ukraine and Russia are pushing Georgian winemakers to pivot to new markets
2 days ago