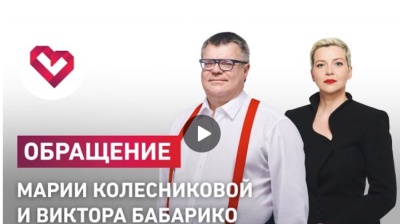 In a video address filmed before he was jailed, ex-banker Viktor Babariko announced he and Maria Kolesnikova, one of the trio of women that campaigned against Lukashenko, have founded a new political party called “Together". / wiki
By bne IntelliNews September 1, 2020

The jailed ex-banker Viktor Babariko and Maria Kolesnikova, one of the trio of women that campaigned against Lukashenko, have founded a new political party called “Together” to fight in new elections the opposition hope to bring about.

Prior to the August 9 presidential election Babariko was the most popular of the opposition candidates, having collected an unprecedented half a million endorsement signatures on his petition to run for president. However, he was arrested on fraud and money-laundering charges.

The announcement of the new party came on the same day that the Kremlin formally recognised the official results of the falsified August 9 presidential elections and Lukashenko as the legitimate president.

“We proceed from the fact that the election was successful. I did it right away, we recognised its legitimacy and, as you know, I congratulated Aleksandr Grigoriyevich Lukashenko on winning this election,” Russian President Vladimir Putin said in an interview, aired on the Rossiya 1 TV channel.

The Russian president believes that the refusal of representatives of the OSCE Office for Democratic Institutions and Human Rights (ODIHR) to come to observe the election in Belarus is grounds for suspecting that the West was plotting an uprising ahead of the elections.

“The Belarusian authorities invited the OSCE Office for Democratic Institutions and Human Rights to take part in monitoring the election. Why didn't they come? It immediately leads us to the conclusion that their position on the results of this election has already been decided,” Putin said.

After sitting on the fence for almost two weeks, the Kremlin’s rhetoric in support for Lukashenko has dramatically scaled up in the last five days, after Putin said he had special forces standing by to aid Lukashenko “if necessary”. The Russian support has significantly bolstered Lukashenko’s position and made toppling him a lot more difficult.

The presidents of Russia and Belarus will meet in Moscow in the next two weeks. The press secretary of the Russian leader Dmitry Peskov told reporters on August 31.

"The dates are being agreed, but the two presidents agreed yesterday that it will take place in the coming weeks. Accordingly, a meeting will take place within a couple of weeks," a Kremlin spokesman said, answering a question about the timing of Lukashenko's visit to Moscow for talks with Putin.

The Kremlin press service reported that Putin and Lukashenko had agreed in a telephone conversation on August 30 that they would meet in Moscow in the coming weeks. This was the sixth recent conversation of the presidents.

However, the opposition is soldiering on and the people of Belarus remain determined to oust the president.

Formerly Babariko’s campaign manager, Kolesnikova has risen to prominence since after she joined forces with Svetlana Tikhanovskaya and Veronika Tsepkalo in a joint campaign against Lukashenko. Tikhanovskaya’s husband Sergei was also jailed and Tsepkalo’s husband Valery was barred from running after the Central Election Commission (CEC) rejected half the signatures on his petition.

Kolesnikova is now the only one of the three women that is still in Belarus after the other two fled into exile under the threat of arrest. She has been actively campaigning against Lukashenko and has been a high-profile face at all the protests since.

Babariko and Kolesnikova announced in a video message that they are founding a new party in Babariko’s Telegram channel, which appears to have been recorded before Babariko was arrested and jailed at the end of July.

In the message Babariko says that the time has come to announce the continuation of the struggle despite Lukashenko's falsification of the elections, and to this end the “Together” party has been set up, the goals of which will be to carry out constitutional reform, work to improve the economy, and the opportunity for people to show civic initiative.

“Hundreds and thousands of Belarusians, talented professionals, are ready to take responsibility and build a new Belarus together,” Kolesnikova said in the joint message. “Registration documents will be submitted in the near future. We will unite and be even stronger. Together we will win!”

Lithuania, Latvia and Estonia imposed travel bans on President Alexander Lukashenko and 29 other Belarusian officials on August 31, signalling impatience with the West’s cautious approach by announcing sanctions without waiting for the rest of the EU.

The three small Baltic states have led calls firm measures against Lukashenko, who is accused by opponents and the West of rigging an Aug. 9 election to prolong his 26-year rule.

The sanctions target officials they accuse of having a role in vote-rigging and in violence against protesters since the election. The inclusion of Lukashenko was a prod to other European countries, so far reluctant to back measures against him personally.