Opponents of name deal protest in Skopje ahead of final vote 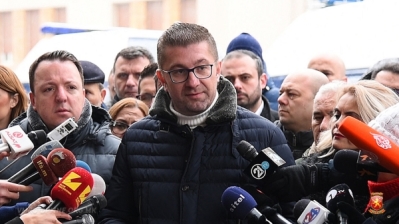 Protests were held in the Macedonian capital Skopje on January 9 against the name deal with Greece as the parliament prepares to launch the final debate on constitutional changes to rename the country North Macedonia.

The session started with Prime Minister Zoran Zaev explaining the amendments, but was postponed by parliament speaker Talat Xhaferi until January 10 as Zaev had obviously failed to secure the two-thirds majority for the changes to be voted in.

While in the first stage of voting, Zaev had to persuade some opposition MPs from VMRO-DPMNE to support the process, now the obstacle is the small ethnic Albanian party Besa. Besa, which initially voted for the process to start, is now conditioning the voting with the removal of the word Macedonian in front of “citizen of North Macedonia” in the clause on citizenship.

The demand is unacceptable not only for Zaev but also for the eight opposition MPs who supported the amendments in the first round of voting, defying the VMRO-DPMNE party leadership, and resulting in them  being expelled from the party.

Earlier in the day, Zaev accepted the demands of a smaller ethnic Albanian party, the Alliance for Albanians, which had conditioned voting on a change of the constitution which was only technical, and not contentious for other MPs.

Neither VMRO-DPMNE nor Besa attended the session.

"Your yes vote is for full membership, and every vote against is for isolation, uncertainty,” Zaev said, addressing the parliament, referring to Macedonia’s expected membership of Nato and the launch of EU accession talks should the parliament approve the changes.

However, Mickoski told journalists at a news conference in front of the Parliament that his party will not support the constitutional changes.

Participants said the protest was held to defend the country’s name and identity.

The changes are crucial for Greece to unblock Macedonia’s EU and Nato integration processes, which it has blocked for years.

If approved in the Macedonian parliament, the name deal then has to be ratified by the Greek parliament. Nato secretary general Jens Stoltenberg recently said he wants the process to end by mid-February.