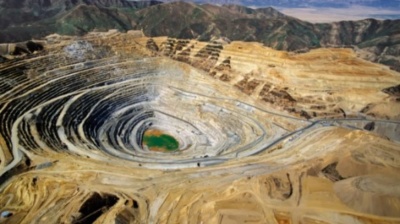 The Udokan copper deposit was discovered in 1940 and holds 26mn tonnes of ore, making it of the largest single sources of copper in the world / WIKI
By Ben Aris in Berlin August 10, 2020

After more than a decade in the making, strip-mining operations began in the depths of Siberia at Udokan, one of the largest copper deposits in the world, the company announced on August 10.

As bne IntelliNews reported, twelve years ago Alisher Usmanov, one of the richest men in Russia, paid $500mn for the Udokan licence, which contains millions of tonnes of copper ore that was discovered in Soviet times, but proved technically difficult to develop thanks to its remote location in the region near Lake Baikal.

Usmanov plans to invest about $2.9bn in developing the mine, which has come online early, as originally the launch of the plant was scheduled for 2023. Geologists estimate there are 26.7mn tonnes of copper ore under the JORC (Australian Joint Ore Reserves Committee, the industry standard) classification.

With some of the processing plants already completed, work-stripping the ore ready to deliver it to the plants for treatment began this week. Work on the rest of the facility is ongoing and will be completed over the new two years. The facility will be operated by the Baikal Mining Company (BGK) and has a design capacity of 12mn tonnes per year (tpy) of ore.

Mining operations have started at the deposit at the Zapadny open cast mine. “Capital mining operations envisage the opening of the Udokan deposit in order to open access from the surface to mineral deposits. In fact, we are starting production. This is an event that the industry has been expecting for 70 years since its discovery,” said Valery Kazikayev, chairman of the board of directors of BGK.

According to the plan for this year, 335,000 tonnes of ore will be extracted and 808,000 cubic metres of rock as the top layers covering the main deposit are stripped away.

In the meantime, work on roads, dumps for the debris, power lines and other infrastructure work is underway, which will allow the use of the main open-cast mining equipment to extract ore.

The development of Udokan includes the construction of the first stage of a mining and metallurgical plant for the production of cathode copper and copper concentrate, as well as the production of up to 125,000 tpy of copper in addition to 12mn tonnes of ore.

The deposit was discovered by Soviet geologists in 1949,  but due to the remoteness of the site and the extreme weather conditions it was left fallow. It has only been thanks to the advent of modern technology that the site became viable, with an expected lifespan of 50-60 years.

The right to develop the deposit was won in 2008 by the Metalloinvest company, later part of Usmanov’s USM holding, and the licence was transferred to BGK to organise project financing.

In 2019, Gazprombank, VEB.RF and Sberbank provided a syndicated loan for the development of Udokan worth $1.79bn.