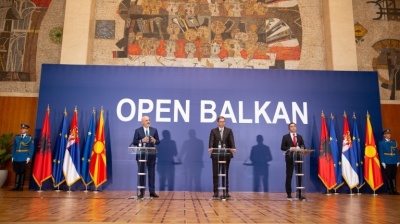 Officials from Albania, North Macedonia and Serbia — the founding members of the Open Balkan initiative — have agreed to form an Implementation Council to facilitate the free movement of goods and services within the bloc, said Serbian President Aleksandar Vucic after a meeting in Belgrade.

The three countries had previously committed to the free flow of goods and services, but Vucic told journalists that this was not yet happening in practice.

The Serbian president emphasised that high-level officials are frustrated when what has been agreed at the political level is not implemented, and added that is why all agencies and inspections will have to come together and reach agreement in order for the idea of Open Balkans to prevail.

“We have agreed on the formation of the Implementation Council, and we will soon agree on its composition. In the next seven to ten days, we will have meetings with representatives of customs, various agencies and phytosanitary inspections to see how the free flow of goods and services is going,” Vucic said, Beta news agency reported.

Albanian Prime Minister Edi Rama emphasised that businesspeople “suffer at the borders” due to waiting, various agencies and checks, and that the markets of the countries in the region are small and as such have a certain strength only if they integrate.

Vucic pointed out at a press conference after the meeting with Rama and North Macedonia’s Deputy Prime Minister Nikola Dimitrov — representing the country after Prime Minister Zoran Zaev announced his resignation — that business communities in all three countries support the Open Balkans project.

At the meeting, officials agreed on unhindered transit between the countries in order to enable faster growth and a higher rate of development, and at the next meeting, at the end of December in Tirana, a memorandum of understanding on work permits will be signed.

The initiative, dubbed “Mini-Schengen”, was launched by the three EU candidate countries as progress of the Western Balkans countries towards EU membership has stalled.

At the Economic Forum on Regional Cooperation held in Skopje on June 29, leaders of Albania, North Macedonia and Serbia unveiled a new name for the initiative, Open Balkan, and reiterated their commitment to making it work.

However, questions were raised over the complementarity of this initiative with the already existing Common Regional Market initiative, with the rest of the Western Balkan countries remaining sceptical and deciding not to participate.

Dimitrov commented on November 4 that regional co-operation is “European, wise and the right choice”.

“The better we cooperate in the region, the easier it would be for us to convince the EU countries that we would not import problems, but produce solutions,” he added.

While Bosnia & Herzegovina, Kosovo and Montenegro have so far declined to join Open Balkan, Montenegro’s Prime Minister Zdravko Krivokapic surprised observers by appearing in Belgrade on the eve of the meeting for an informal dinner with Rama and Vucic.

Relations between Belgrade and Podgorica have been tense for several years, and Montenegro’s President Milo Djukanovic has criticised interference from Serbia. However, Krivokapic is the head of the new government, opposed to Djukanovic’s Democratic Party of Socialists, that was elected last year and comprises several pro-Serb parties.

“I hope that this is the beginning of a new phase in the relations with the government of Montenegro and that, after the renewal of the political dialogue the bilateral relations will be more meaningful,’ Serbian Prime Minister Ana Brnabic said at a press conference following the meeting.