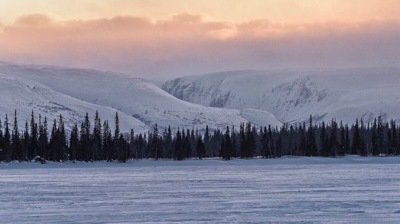 Once-in-a-1,000-year snow melt floods hydropower plant on Russia’s far northern coast. Snow at the Lovozero lake near the northern Russian city of Murmansk melted and flooded the nearby TGK1 hydropower plant, something that happens once in a 1,000 years, according to the company.
By bne IntelliNews June 9, 2020

There were more melting permafrost problems for Russia’s energy infrastructure after the TGK1 power station on the Far Northwest coast reported on June 9 that two of its hydropower units were flooded with “abnormal water inflow” due to melting snow. No serious damage was done, although the company's personnel have been put on high alert.

The water levels at TGK1’s Tulomskiye and Serebryanskiye hydropower plants (HPPs) in the Murmansk region saw water levels rise rapidly to unseasonal highs after snow at the Lovozero lake melted – something which occurs once in 1,000 years, according to the company.

TGK1 has already ordered personnel at the plant to work under “emergency mode” and warned the emergency services of flooding and the potential threat to the HPP buildings that operate in what is supposed to be a permafrost area.

There are no commercial or residential buildings in the region that could be affected, as the power plant was built in a remote area. The company has sent a division to monitor and control the situation.

At this stage, TGK1 does not anticipate any interruptions to electricity supply to consumers.

The flooding at TGK1 follows an oil spill in the mining town of Norilsk on Russia’s Far North coast last week that was the worst in the country's history and has been declared a national emergency.

Norilsk is also in a permafrost region. A fuel pipeline broke and dumped millions of gallons of toxic fuel into the nearby river, causing massive environmental damage that will take decades to clean up. The reason for the accident is believed to be melting permafrost that caused the pipe to sink and fracture.

The whole of Eastern Europe has been subject to two very warm winters, which has caused a glut on the gas market. But now it seems that the warm weather is threatening to cause even more serious damage and the melting permafrost could in theory threaten much of Russia’s pipeline infrastructure.

“The warm winter and high water inflows led to elevated hydro generation in 1Q20, a trend which has continued into 2Q20. (TGK1 reported 18.5% year-on-year growth of hydro generation in 1Q20). This latest news about the abnormal increase in water inflows yet again shows that melting permafrost continues to bring more technical issues in Russia,” VTB Capital (VTBC) said in a note.