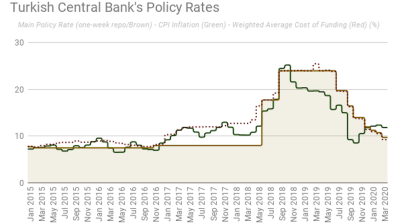 The official March annual inflation rate in Turkey has come in at 11.86% compared to February’s 12.37% as a consequence of the collapse in global oil prices. It was the first slowing of the rate in five months.

Many analysts now anticipate that the drop in inflation combined with the sharp downturn in the economy caused by the coronavirus emergency will prompt the Turkish central bank to follow up last month’s emergency 100bp interest rate cut to 9.75% with further easing. But the Turkish lira (TRY) remains under heavy pressure—on April 3 the currency sank as far as 6.75 to the dollar as it continued to show weakness not seen since the 2018 lira crisis. As Jason Tuvey at Capital Economics observed in an April 3 note to investors “[…] Turkey’s large external debts leave the economy vulnerable to tightening external financing conditions and, if pressure continues to mount on the lira, the scope for further policy support will be limited”. 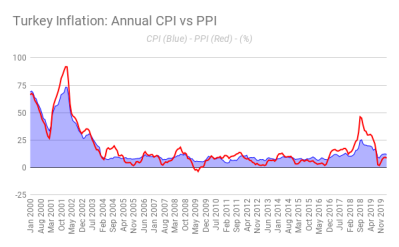 The fall in inflation recorded in March brought Turkey’s real benchmark interest rate to -2.11%, still among the lowest in the world.

The lira is down around 11% against the dollar so far this year, but, with the central bank mounting rearguard interventions selling billions of dollars into the market, has performed far better than emerging market peers such as the Brazilian real or South African rand.

The inflation outcome, announced by the Turkish Statistical Institute (TUIK) was broadly in line with the consensus forecast.

On a month-on-month basis, which tends to be volatile due to seasonal effects, consumer prices rose by 0.6%.

Turkey is nearly entirely dependent on imports to meet its energy needs.

Tuvey said: “The breakdown of the data showed that the fall in inflation was driven by weaker transport inflation. It fell from 11.7% y/y in February to 8.8% y/y last month—which directly shaved 0.5%-pts off the headline rate—as the drop in global oil prices pushed down local fuel prices. At the same time, food, health and education inflation all eased.

“Inflation in most other price categories picked up last month, with the central bank’s preferred measure of core inflation rising to a seven-month high of 10.5% y/y. But with efforts to combat the coronavirus outbreak escalating in the past week or so, the economy is now in the midst of a sharp downturn—we expect GDP to contract by around 2% over this year as a whole. This is likely to dampen core price pressures, and headline inflation, over the coming months.”

It’s a near certainty that President Recep Tayyip Erdogan is set to further push the central bank to loosen monetary conditions further. Under pressure from the strongman, the regulator has aggressively slashed its benchmark rate from the 24% it stood at in July last year. “We expect the one-week repo rate to be cut to 8.75% over the coming months. A lot, though, hinges on the lira,” said Tuvey.

“Highest in G20 by some distance”

Timothy Ash at BlueBay Asset Management responded to the latest inflation data with a note saying: “Headline lower, core higher… Turkey still has the highest inflation in its big EM peer group, and I think the highest in G20 by some distance. Indeed, in the inflation stakes it is up there with high yielding EM frontier credits—Nigeria, Ghana, Pakistan. That’s how far the CBRT’s [Central Bank of the Republic of Turkey’s] inflation fighting credentials have fallen.

“All that said, two trends are coming up against each other now—steady depreciation of the lira, set against global deflation with COVID19, and remember lower oil prices will probably take 1-1.5% off the headline inflation rate. Sense here that inflation will be stuck around the 10% level for some time, as the CBRT really makes no significant effort to fight it. The CBRT is not an inflation targeting central bank but an inflation accepting central bank.”

The TUIK data showed food price inflation dropping to 10.1% y/y in March from 10.6% in February. There were reports of the prices of some vegetables dropping after produce that couldn’t be exported due to the coronavirus measures was sold on the domestic market.

The Turkish central bank’s next rate-setting meeting is scheduled for April 22.

Industrial production in Ukraine tumbles by 16.2% year on year in April
2 hours ago
Polish retail sales come down crashing in April, hit by COVID-19 lockdown
13 hours ago
70% of companies in Czech Republic saw a drop in orders in May due to COVID-19 outbreak
2 days ago
Poland’s industrial production records unprecedented fall in April in the wake of COVID-19 lockdown
3 days ago
Poland’s PPI deepens fall to -1.3% y/y in April
3 days ago