North Macedonia, Bosnia and Moldova most dependent on Russian gas 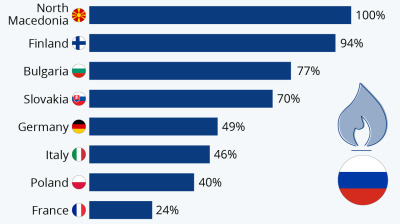 North Macedonia, Bosnia & Herzegovina and Moldova are the most dependent on Russian gas among European countries, data of the European Union Agency for the Cooperation of Energy Regulators (ACER) showed.

The US and the EU are currently working on a strategy to replace natural gas supplies to Europe if Russia "turns off the tap" as a result of the standoff with Western powers over Ukraine. Qatar has said that it sees no way that it could replace the needed amount by itself.

Thus, if new sanctions are imposed on Russian President Vladimir Putin personally or on his country, it could cause an energy crisis on the continent due to the dependence of much of Europe on Russian gas coming to Europe via pipelines.

Dependence was 89% in Serbia and 77% in Bulgaria, according to ACER’s 2020 or latest available data.

Slovenia’s reliance on Russian gas is 51%.

North Macedonia plans soon to launch the construction of a gas interconnector with Greece, a project of strategic significance for the country as it will enhance the energy security by diversifying gas supply sources.

Russian gas supplies are arriving to North Macedonia via Bulgaria.