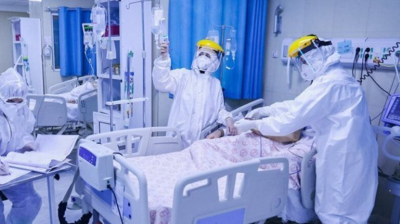 The coronavirus hospitalisation rates are on the rise again in Iran. / Fars News Agency.
By bne IntelIiNews October 21, 2021

Nearly everyone in Iran has been infected by the coronavirus at some point during the COVID-19 pandemic, and some have caught the virus more than once, but the country still hasn’t achieved herd immunity, the New Scientist has reported.

Instead of herd immunity, said the trade publication, Iran was seeing a punishing new wave of deaths driven by the delta variant of the coronavirus.

The country of 84mn has experienced around a month of relatively lower COVID-19 numbers, but the virus now appears back on the rise for a sixth wave. By October 20, daily infections were again running over the 10,000-threshold. The official coronavirus death toll, meanwhile, stands at 124,000, though officials have conceded the real number could be twice as high. During the peak of the fifth wave, daily deaths were well over 500.

Iran’s health minister, Bahram Eynollahi, said last week that Iran needs to reach a coronavirus vaccination rate of 80%. But his ministry’s figures showed only 35% of Iranians fully vaccinated with two vaccine jabs, with 75% of individuals recorded as “one shot”. The figures released appeared to be percentages of adults over a certain age, but the data was not clear.

Vaccinations would stop rife hospitalisations but COVID-19 would not fully go away, the minister added.

New Scientist referred to how evidence is piling up that immunity conferred by a coronavirus infection wanes. A study from India found a COVID-19 reinfection rate of 27% during a surge in the country caused by the delta variant earlier this year.

Mahan Ghafari at University of Oxford was cited by the journal as explaining how, to get round a shortfall in provincial-level coronavirus information in Iran, he and his colleagues analysed figures from Iran’s National Organization for Civil Registration (NOCR) that recorded how many deaths there were from all causes in the first nine months of 2020. After comparing these with historical data to see how many more deaths there were than usual, the researchers used the excess deaths figure as a proxy to estimate the number of COVID-19 deaths and population-level exposure to the virus.

The researchers were reportedly able to reconstruct the dynamics of the pandemic in Iran from January 2020 through to September 2021. After calculating how many people in each province had contracted COVID-19 using known global figures on the percentage of infected people who die—known as the infection fatality rate (IFR)—for each age group and dividing the number of excess deaths by the IFR they produced an estimate for the number of infections and a “viral attack rate”.

New Scientist concluded: “The analysis showed that the total infected population was probably very high in many provinces. Eleven of them had rates over 100 per cent as of 17 September. The highest rates were seen in Sistan and Baluchestan province, which had an estimated attack rate of 259 per cent. If accurate, that would mean most people have had the virus twice and some for a third time. The researchers conclude that herd immunity through natural infection hasn’t been attained in Iran in spite of widespread exposure to the SARS-CoV-2 virus, probably because of immunity waning over time, susceptibility to new variants of concern like delta or a combination of the two.”

Mark Loeb at McMaster University in Canada was reported as saying that studies using direct measurements of infections were needed to conclusively determine the attack rate of the virus for a given population, but that he found the study’s conclusions plausible. “Overall, what’s happening globally is that it certainly does appear that antibodies wane and there’s not this point where, miraculously, herd immunity or herd effect is achieved,” he said.

Loeb added, however, that he wasn’t aware of any pathogens for which herd immunity has been reached without vaccination. “By far the safest and most effective way to achieve herd immunity is through vaccination,” he determined.