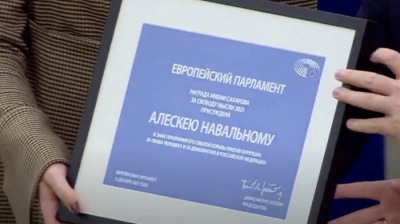 Jailed opposition figure Alexey Navalny was awarded the prestigious Sakharov Prize for Freedom by the European Parliament, but it spelled his name and the word "corruption" incorrectly on the certificate. / wiki
By bne IntelliNews December 16, 2021

The European Parliament awarded jailed opposition figure Alexey Navalny with the prestigious Sakharov Prize for Freedom on December 15, but spelled both his name and the word “corruption” incorrectly on the certificate.

In an embarrassing gaffe, the certificate collected by Navalny’s daughter at a ceremony in Strasbourg had the typos on the official certificate, causing much scoffing on social media.

“It speaks volume about the West’s problematic attitudes towards Russians when European Parliament can’t even spell Navalny’s name, as well as the word “corruption”, correctly in Russian, a major European language, native to millions of EU citizens. On Navalny’s own award!” bne IntelliNews contributor and well known journalist Leonid Ragozin said on twitter.

Navalny was poisoned last year and medevaced to Germany to recover. He was arrested on his return to Russia in January and sentenced to 2.8 years in jail for breaking the terms of his parole from an earlier conviction, which he claims was politically motivated.

Navalny's daughter collected the award named after the Russian physicist and Nobel Peace Prize winner on her father’s behalf.

The certificate, written in Russian, had two spelling mistakes in it: Navalny's name was written as "Aleskey" and the word corruption lost one "r." The certificate was signed by the European Parliament's president, David Sassoli.

The European Parliament has since corrected the mistakes and replaced the certificate.

The mistake is reminiscent of a similar incident when Hilary Clinton presented Russian Foreign Minister Sergei Lavrov with a red "reset button" to symbolise improved ties while she was Secretary of State in 2009, but the word "reset" was mistranslated into the Russian for "overcharge".

"I would like to present you with a little gift that represents what President Obama and Vice President Biden and I have been saying and that is: 'We want to reset our relationship and so we will do it together," said Clinton, presenting Lavrov with a palm-sized yellow box with a red button.

Clinton joked to Lavrov: "We worked hard to get the right Russian word. Do you think we got it?"

"You got it wrong," said Lavrov, smiling as the two pushed the reset button together before dinner at a Geneva hotel.

He told Clinton the word "Peregruzka" meant "overcharge", to which Clinton replied: "We won't let you do that to us."

"We mean it and we look forward to it," she said of "resetting" the relationship, a phrase that Joe Biden first used at a security conference in Munich.