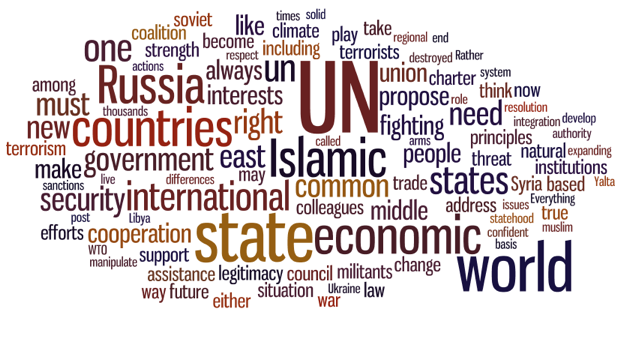 President Vladimir Putin's speech to the UN on September 28 – the first time he has personally appeared there for a decade and probably his most significant speech since 2007 – clearly shows the Kremlin’s foreign policy goals and how it is trying to take control of the international debate and return Russia to the top table of international affairs.

Putin doesn’t do anything without a good reason. So the first question to ask is, why did he turn up in New York at all? Having abandoned diplomacy (as US President Barack Obama pointed out) and taken the military option in first Ukraine and now Syria, his speech was designed to make the clearest statement of Russia’s foreign policy since the president appeared in front of the world’s collected policy wonks at the 2007 Munich Security Conference annual meeting. At that event, he told delegates that Russia was Europe’s “natural partner”, but that Europe had to meet Russia half way and respect its interests, as it was and still is a major European power.

Now the rhetoric about the need to “respect” Russia’s interests is coupled with the threat of Russian soldiers destabilising countries until the West is forced to react.

The positive takeaway is that for all the obvious barbs aimed at Washington, the speech was pretty mild. To separate the wheat from the politically charged chaff, international consultants Teneo Intelligence put together a 'word cloud' of the key words contained in Putin’s speech. The most common word (appearing 15 times) was “UN”.

Putin painted a picture of a world in chaos, under attack by Islamic terrorists, where an international coalition was the only way to reestablish harmony and Russia should play a key role in that. Putin criticised the US throughout the speech (which he avoided identifying by name), blaming it for destabilising the world, and proposed that the US hegemony give way to a world policed by the UN – in which Russia would also play a leading role. (He opened his speech by dismissing recent calls for the removal of the veto power of the permanent members of the UN Security Council, of which Russia is one.)

“President Vladimir Putin used his address to the United Nation’s General Assembly on 28 September to present Russia as a constructive world power and a champion of global cooperation, while condemning US actions in the post-Cold War period,” Otilia Dhand, senior vice president of Teneo Intelligence, said in a note. “Putin claimed that he would seek to form a broad international coalition to resolve the crisis in Syria and deep UNSC-led analysis of terrorist threats in the Middle East.”

This is not a new message, and indeed Putin was criticised by Russia-watchers for his repetitiveness. But the Kremlin’s insistence on a multi-polar approach to international affairs has hardened over the last few years. “The underlying message could be summarised as follows: the irresponsible unilateral breaches of established principles by the US has led to the deterioration of the international order; in contrast Russia stands by these principles as a constructive force for the future,” Dhand wrote.

Putin suggested that cooperation between larger economic blocs (the Eurasian Economic Union, the EU and China’s new Silk Road) was emerging, but that the US and the EU were breaking the principles of global economic cooperation by secretive Transatlantic Trade and Investment Partnership (TTIP) negotiations. According to this logic, Russia needs to both carve out a sphere of influence for itself and to secure a role in making such critical decisions.

This is an old story as far as Russia is concerned, but the new element is Syria, which has provided Putin with some real leverage over the West. The EU is trying to cope with millions of refugees arriving on its borders from the Middle East and so cannot ignore the problem any longer.

Putin's speech was a carrot-and-stick offer to the US. By threatening to further destabilise Syria for the foreseeable future (Syria had three references in his speech), Russia could allow Islamic State to not only run amok, but also take political control of a post-Assad regime (IS had six references). What Putin was suggesting is a nightmare scenario for Washington, and Russia's ongoing destabalising of eastern Ukraine means this is no idle threat. But with Russia’s help (Russia had eight references), this could be avoided if the coordinated international action was conducted under the aegis of the UN (15 references).

The irony of this position was the mildness coupled with the suggestion that all major decisions be moved into the forum of the UN, as a global government is probably the closest Putin will get to a peace offering to Washington in the near future. But reports coming out of the meeting between Putin and Obama after Putin's speech suggest that little progress has been made and a prolonged sanctions regime and political standoff is the most likely scenario.