MOSCOW BLOG: Russia’s import substitution has not been a great success

Russia’s import substitution has not been a great success. The biggest winner was the agricultural sector, which was about to be opened to stiff competition from Europe following Russia’s accession to the World Trade Organisation (WTO) in 2014. But while pig farmers have been buoyed by Russian imposed tit-for-tat agricultural sanctions, machinery imports from the west have actually increased.

“Robust increases in machinery imports suggest that imports are increasing their share in Russian investment activity, despite the embargo and financial sanctions imposed by the West,” Institute of International Finance (IIF) chief economist Ondrej Schneider said in a paper looking at the issue. “Russia’s great import substitution manoeuvre boils down to a policy supporting low value-added agriculture production that is unlikely to lift the economy’s growth rate from the current slow rate of 1-2% annually.”

Russia produces few high value goods that can compete with imports. Thanks to oil inflating the value of the ruble it has always been cheaper and easier to import finished goods than go through the process of investing a lot of money into expensive production and development lines that produce goods that are at the end of the day inferior to the imports. The goal of the Kremlin’s sanctions is to break that equation, but it has only been really successful in the agricultural sector – most famously with cheese production.

The agricultural sanctions imposed by the Kremlin on Europe have had the most notable affect on consumption patterns. The share of imports in private food consumption declined noticeably from 36% in 2014 to 21% in the second quarter of 2017, the IIF study found, while non-food imports, which are largely unsanctioned, have been a lot more stable. 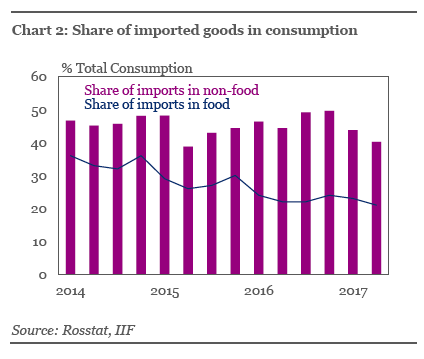 But even the import embargo on European food products imposed in 2014 has had a very limited effect. The IIF split the overall food consumption basket into embargoed and non-embargoed foodstuffs and found that the sanctioned food group share declined sharply by 10pp in late 2014 and early 2015 when the embargo was implemented, but remained largely stable after that at 20%, not very different from the share of imports in overall food consumption. The new Russian cheese factories were running by 2016, but the industry has not moved very far beyond that.

As for the import of non-food products, very little has changed from before the sanctions were imposed: the share of imported non-food goods remains above 40% of the total.

“Trade statistics suggest that import substitution has largely failed to boost the share of domestic producers in more technologically advanced investments,” the IIF found. Equipment and machinery imports have picked up since the end of 2016 as the economic recovery got underway. 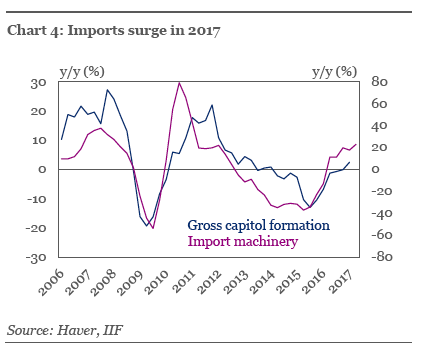 Russian manufacturers may be starting to go up the value-added chain thanks to labour costs that are now less than those in China. Russia’s carmakers, many of them foreign companies that are producing to international standards, are starting the process of exporting “made in Russia” cars to the other Commonwealth of Independent States (CIS) countries, but the numbers are still in the tens of thousands not the millions.

A new government commission on import substitution was established in 2015 to try and accelerate this process and has subsidised more than 2,000 import-substituting projects in industries such as engineering, electronics and pharmaceutical at costs estimated at more than $40bn between 2016 and 2020, but to little effect, concludes the IIF.

The main effect of the global 2008 crisis and the subsequent sanctions war with the west over Ukraine has been to massively depress imports, thus allowing Russia to maintain a positive balance of payments.

The current account surplus peaked at over $100bn in 2008 and averaged 7% of GDP since 2000 until the oil price crash in 2015. Lower oil prices shrank the current account surplus to $25bn in 2016, only 2% of GDP, despite a massive depreciation of the ruble by 50% and the resulting 30% reduction in imports. With oil prices averaging about $52 this year, oil-related exports should increase from $150bn last year to $185bn or so this year,

“That should be mean Russia’s current account would come in at $50-60bn, but analysts are widely expecting it to be much lower,” says the IIF, which is predicting $40bn (2.6% of GDP) this year.

Indeed, as the economy starts to recover and the first green shoots of consumption recovery are showing, imports are rising again; Russia ran its first negative current account balance in the second quarter in years, albeit of only $300mn.

The main reason for the underperforming current account is rapid import growth. Despite an ongoing weak recovery, imports of goods increased 27% from a year earlier in dollar terms during January-June 2017, reports the IIF. At the same time, enthusiastic Russian tourists have increased their foreign spending by 26% so far this year from a year earlier. This was despite a ban on Turkish holidays as part of yet another trade spat that is now coming to an end. The ban had a favourable impact on Russia’s current account as Russian tourists usually spend some $4bn a year in Turkey alone on their vacations.