MOSCOW BLOG: Can the cheap ruble save Russia?

The Russian government has fixed on a policy of "import substitution" to pull the national economy out of its slump. And it is right: to return to vibrancy, Russia has to stop just digging things out of the ground and start making things.

That is going to be difficult. The state is pouring billions of dollars into sectors such as agriculture and weapons where Russia has a clear "competitive advantage". And this investment has made some difference: cheese production jumped by 40% in the first half of this year. But just as clearly, Siberian Camembert is not going to drive Russia's resurgence as Europe’s biggest and most profitable consumer market.

More encouragingly, German carmaker Volkswagen just launched a giant car engine plant in Kaluga which will now export to European markets after labour and material costs fell far enough to make exports profitable for the first time in two decades. Ford also launched a $275mn engine plant In September, a testament of faith by the management that Russia’s automotive market will eventually recover. These are more serious investments that could contribute to a recovery. 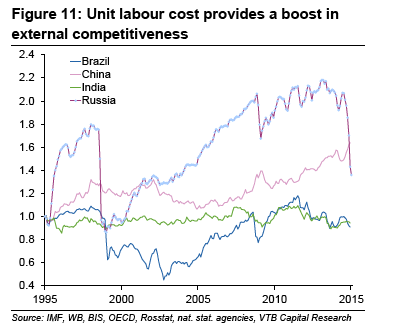 However, more is needed and these examples by themselves are necessary but not sufficient. The jury remains out on whether a cheap ruble - which is now the official policy of the Central Bank of Russia (CBR) - will work to spur investment and growth, replacing the previous consumption-driven model.

The first thing to say is that it had better work as the government doesn't have any other options at the moment. The showdown with the West over Ukraine means Russia has been cut off from the international capital markets for the foreseeable future. Even if the European Union (EU) lets its sanctions lapse at the end of this year, the US financial sanctions will almost certainly remain in place for years and given the global nature of financial markets that effectively excludes Russian companies from doing business with any bank irrespective of where it is actually domiciled (with the exception of the Asian banks that have their own rules, but not nearly as much money as the West).

There are typically three main drivers of economic growth in Russia: consumption, construction and investment.

With real incomes falling for the first time since Putin took office, the consumption-led growth has already run its course. Consumption could also be driven by wage increases, but part of the problem is that in the past the government was increasing state employees' wages well ahead of inflation but now these wages have been frozen. Given that up to half the population are in some way connected to budget spending, the state wage freeze has become a huge weight on growth. 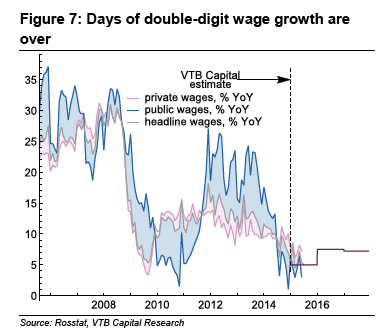 Consumers could borrow more, but having already over extended themselves in the last few years - average household debt has doubled from about the equivalent of one month's salary to over two months - the population is busily deleveraging. 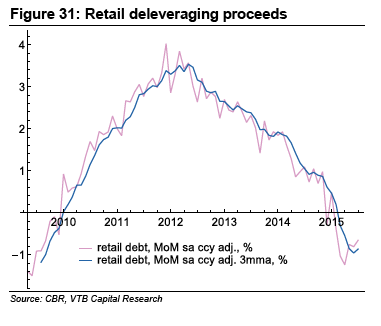 "To account for weaker wage growth and the additional pass-through from FX weakness to inflation, we are revising our consumer spending estimate and now see it contracting 9.5% over 2015 in the central scenario," VTB said in a note.

The picture with construction is also bleak. The real estate market has also been hit by falling incomes and high inflation. With too many projects started during the brief economic upswing in 2011-2012, the Russian real estate market is currently oversupplied with everything except warehousing, so that’s not going work either.

Rising fixed investment is the one place where a difference could be made. Labour and inputs are cheap enough now to make Russia a major manufacturing centre that could export to the rest of the world. But the prospects for success are not good.

Fixed investment growth was already struggling in the second half of 2013 when it crossed into the red and has been there ever since. Russia needs investment growth of at least 20% y/y if it is going transform, so with the low levels of investment the economy is currently going backwards. Fixed income recovered to -6.8% y/y in August on the low base effects, but the recovery remains dominantly optical. 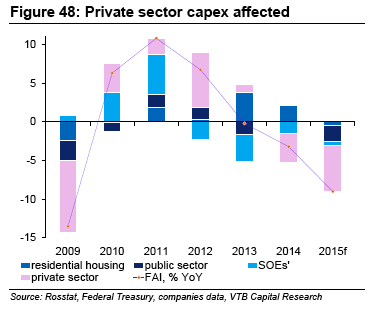 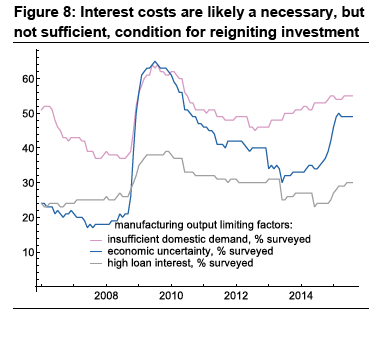 One of the first problems the Kremlin needs to solve is the inefficient and endemically corrupt system that has long stymied the development of companies.

In 2012, President Vladimir Putin called on the government to put in the reforms to lift Russia from 120 on the World Bank’s Doing Business ranking to the top 20 by 2018. A start was made on this work and Russia is currently at 67 on the list, but the geo-political conflict intervened and the government barely mentions this topic any more. 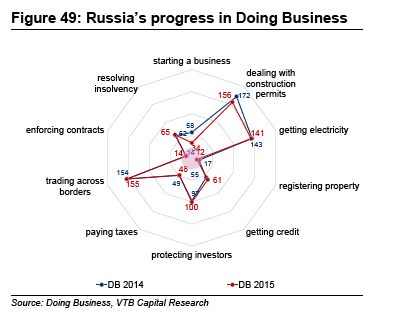 The cost of borrowing also remains prohibitively high. After hiking the overnight rates from 6.5% to 17.5% in December the CBR has cut rates five times this year. But as inflation is starting to creep up again the cutting ran out of steam and the regulator didn’t cut rates in September. Analyists don’t expect new cuts until the new year so businessmen are sitting back to wait until them before asking for loans. 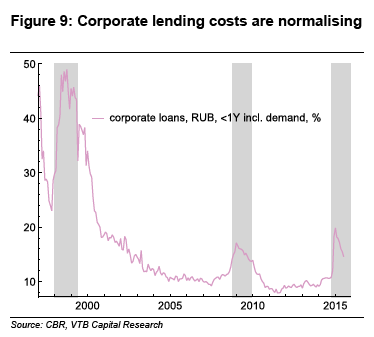 Likewise, a raft of other reforms are not happening. Without access to cheap long-term international capital, Russian companies have no way to finance big investment projects. Russia badly needs a complete overhaul of its pension system as the most obvious source of this type of funding. And its 143mn-strong population means a proper pension system could provide most of RUB1 trillion needed for just the infrastructure investment. But the two attempts to reform the sector were fluffed. Currently the pension system holds the equivalent of 5.6% of GDP – more than the 3% it had when reforms were started, but well off the 65-100% of GDP that mature pensions systems hold.

The poor investment climate coupled with the lack of cash means that Russia’s fixed investment is woefully inadequate to drive growth. Moreover with an estimated $1.3 trillion stashed overseas, according to a recent report, Russian businessmen are not bring their money home - probably the biggest and easiest to get source of financing available today.

An average of $70.6bn left Russia each year over the last two decades, or 8.3% of GDP. The largest movements of capital occurred during the boom years of the noughties up until the global financial crash in 2008. Between 2010 and 2012, there was another flurry of capital flight as Russian firms began paying down their international debt and deleveraging, with  $141bn a year leaving the country. In 2011, $174.2bn — an amount equal to 9.9% of GDP — fled the country, according to the report by Global Financial Integrity (GFI).

Then there is the economics of the weak ruble strategy: while it should encourage manufacturing and hence exports, actually the net result will probably be to drive up imports in the short-term.

"On the longer horizon, weaker ruble effective exchange rate (REER) creates the precondition for an increase in the export of a diverse range of goods, from agriculture to manufacturing," VTB Capital economists Alexander Isakov and Petr Grishin said in a recent report. "However, this involves entering new markets and, more importantly, creating and adapting local capacities so that they can better meet external demand. That needs to be preceded by a recovery in [fixed income]. In the meantime, a recovery in local demand would push imports (both consumer and investment) higher, which makes net exports a less likely growth engine in the medium-term." 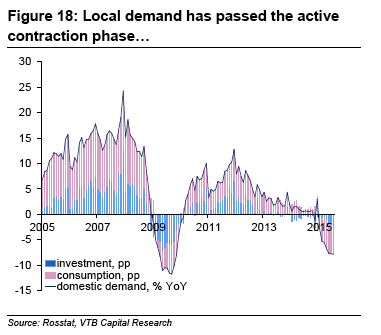 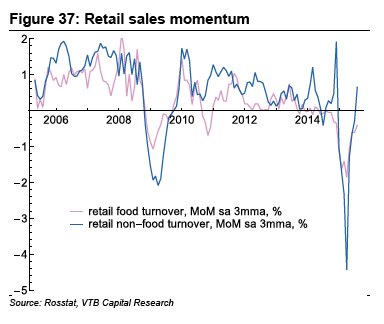