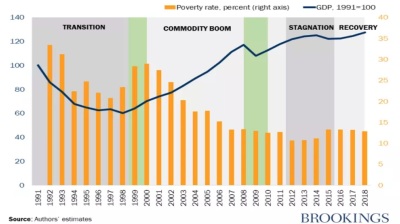 President Vladimir Putin unveiled a very ambitious reform plan during his state of the nation speech on March 1 last year. Among the ambitious goals – some say unattainable goals — the president called for a drastic reduction in poverty between now and 2024, when he is slated to step down from office.

Currently, unlike its BRICS peers, Russia has zero poverty as measured by the UN basic benchmark of $1.25 per day wages. The Russian poverty line is set at $12.80 and today 13.2% of the population live below this level, already down from 13.8% at the time of Putin’s speech last year.

Indeed, Russia’s level of poverty is not extreme as this level is below the EU average and also slightly below the US poverty level of 13.5%, according to one estimate. Other estimates include people living “close to poverty”, which increases the share closer to 30%. Measuring poverty remains a controversial subject. 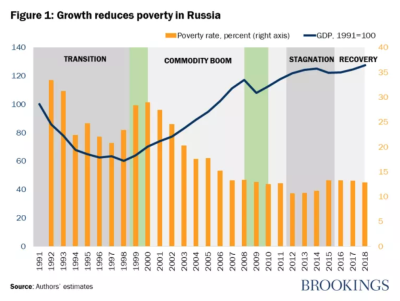 Of course Russia’s poverty line is lower than that of other developed nations – but not by much. Where to set the line is also controversial. The US definition of “extreme poverty” is people living on only $2 per day, whereas the more general poverty line in the US is circa $15.4 per day. The Russian poverty line of $12.80 takes into account the purchase price parity (PPP) adjustments for income – goods are cheaper in Russia so your money goes further – and in this case Russia’s poverty level is on a par with the US and most of the EU.

Can Russia really halve its poverty rate to 6.6% in six years as Putin demanded? If Russia succeeds in this then it would have one of the lowest poverty rates in all of Europe.

The Brookings Institute attempted to answer this question in a paper released this week, in which it estimated that Russia would need to put in GDP growth of 4.4% a year between now and 2024 to achieve this goal.

However, such fast growth is unlikely. Even the government’s own estimate predicts lacklustre growth of about 1.3% this year rising to 3% in 2021 and then remaining at that level for several years. With 1.5% “business as usual” growth poverty would be reduced to 10.7% — already an excellent result, but shy of the president’s target rate — according to Brookings.

If Russia hits the official forecast of 3.2% growth in 2021 then poverty would fall to 8.1%. Analysts bne IntelliNews talked to have speculated that Putin doesn't seriously expect any of the May Decree goals to be met: the point of setting such ambitious targets was to light a fire under the bureaucracy and the goal is to get the reforms moving rather than actually achieve any of the targets.

However, Brookings argues that even with less than 4.4% growth poverty can be halved by 2024. 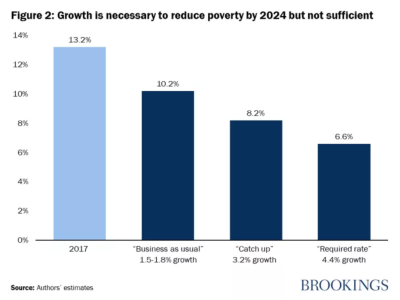 And the authors echo other analysts by pointing out  that any progress is welcome progress. The goal of 6.6% is arbitrary, but any reduction in poverty will change millions of lives for the better.

“As Russian policymakers tackle the goal of halving poverty, it is heartening to know, that at least based on our analysis, accomplishing this laudable goal is now within reach,” the authors conclude.